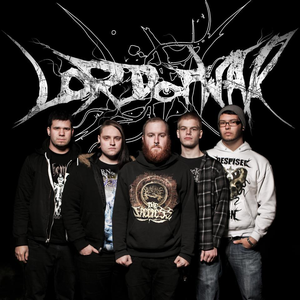 Since 2008, Lord of War has been inflicting its unique brand of thematically driven progressive brutality on their home town of San Diego, CA. Drawing inspiration from all across the modern extreme metal spectrum and paying homage to such revered acts as The Arcane Order, Through the Eyes of the Dead, and The Black Dahlia Murder. After enduring several lineup changes over the course of their formative years, the band has recently come to what is definitively the most cohesive and dedicated lineup to date. Lord of War brings to the table a perfect balance of engaging technicality and progressive elements seamlessly intertwined with powerful melodies and crushing breaks. They pride themselves in keeping an expansive repetoire and a “something for everyone” ethos, while simultaneously maintaining an uncompromised level of dedication to musicianship and innovation within the scene. They constantly push their collective skillsets to the next level in order to deliver increasingly imaginative aggression to their fanbase. Long a mainstay in their local metal scene, they’ve pushed to expand their horizons through the landing of shows with such national acts as Origin, Cattle Decapitation, Pathology, and The Faceless. The world took notice of their efforts, and in Fall 2011, the band announced signing a multi-album deal with the legendary metal label Unique Leader Records. This opportunity precipitated an official January 31st 2012 street date for their debut album “Celestial Pestilence”, which was recorded by Arde Ostowari from the technical deathcore phenomenon Burning the Masses. Going forward, Lord of War is determined to become a major presence in the national and global scenes through extensive touring and recording of new material, and are currently poised to take their campaign of domination to an international scale. Read more on Last.fm. User-contributed text is available under the Creative Commons By-SA License; additional terms may apply.