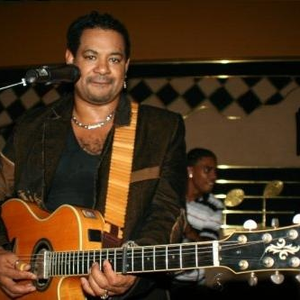 Vargas was born on May 23 of 1961 in Santa Maria, Dominican Republic, which is a town in the municipality Pepillo Salcedo. He is the son of Ana Victoria Vargas Perez and Juan Bautista Valdez Santana. His grandparents were Angelo Maria Vargas, Amelia Pérez, Nicolas Valdez and Santana Eligia. The latter two were his paternal grandparents. He joined the army at the age of 16. When he left the army, he met a young man named Abila, who was the only one throughout the region played the guitar. Abila taught Vargas to play the guitar that his mother had bought him. Like many musicians in his area, Vargas played merengue, the calabash, drum and accordion. These are the instruments used in the bachata, but Vargas introduced other elements, like playing the bongo with chopsticks instead of hands, and playing merengue rhythms. Vargas started recording bachata in 1982, but was not successful until the end of the decade, when he introduced his new style "guitar merengue." A year later he recorded his first single, a 45 RPM that was what was used at that time. He sold his singles himself, going from record store to store. Luis Vargas consolidated his career as a professional artist in the world of bachata, having to his credit more than 20 productions with other labels and, in mid-2001, launched the album " In Person ", the first with his new record label. Luis Vargas's close friend, Anthony Santos has been very helpful in his career. However, after Vargas's career developed, so did the rivalry between them, to the point that Vargas challenged Santos to a music duel. Vargas has been characterized by a disorganized personal life: the father of 7 children with different women who came to know in one of his concerts and never seen again. In 2009 he said he would leave the Dominican Republic with his family to live in Miami, due to the crime in the DR. He also declared his sympathy with the PRD. Read more on Last.fm. User-contributed text is available under the Creative Commons By-SA License; additional terms may apply.