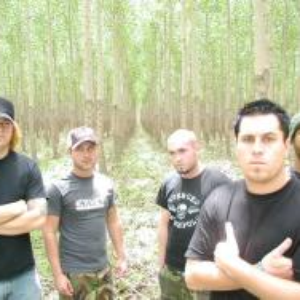 Manntis is a five piece band from the Riverside County area of Southern California. The band originated in the fall of 2000, beginning with only four members the band thought to bring in a second guitar player. After a couple of months of practicing and writing, the band began to play local parties and shows, more and more people started to talk and the venues started to call. Manntis began playing anywhere and everywhere and overwhelmed anyone that stepped foot in front of the stage. The band became more like a family and a brotherhood. The talent continues to progress and their following expands with each show. Their sound of music cannot really be labeled into a certain category of style due to the fact it reaches some many different types. The best way you could describe would be Straight Metal with alot of Hardcore Soul. Many bands have influenced the members through the years including Pantera, Lamb of God, Hatebreed, Boy Sets Fire, Zao, Poison the Well, Meshuggah and Killswitch Engage. The energy on stage is what really attracts peoples' attention while watching Manntis live. It's the positive feeling they receive when they hear that explosion of sound and emotion. All of the bands songs are about reality, relationships and being straight forward, once again felling and being positive. Manntis has played over a thousand shows from a little bar down the road, L.A. venues (The Roxy, Whiskey and Troubador) to big events like MTV's Campus Invasion and Throttle Sports & Music Festival. Day by day and show after show Manntis and their crowds they call family continue to grow and spread. With street teams and fans across the U.S. and even over sea's the band feels only the sky is the limit and only time will tell when everybody has heard the name Manntis. Read more on Last.fm. User-contributed text is available under the Creative Commons By-SA License; additional terms may apply.