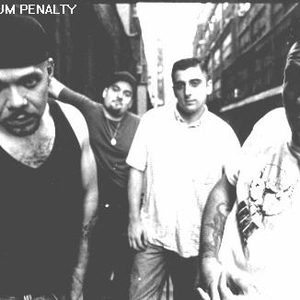 As part of the original Hardcore movement, Maximum Penalty has been and still is, one of the most original hybrids of the New York Hardcore sound. From the band’s inception, the founding members have fused different styles such as Hardcore, Metal, Hip-Hop and melody which put MP’s unique stamp on the scene. The band started out at the tail end of the first wave of the hardcore movement in the late 80's. They played the infamous hardcore matinee at the now deceased CBGB's with friends and family from the N.Y. scene. From that point the Crossover Metal scene exploded into the 90’s with MP's unique brand of Hardcore, along with their peers such as Sick of it all, Killing Time & Agnostic Front. MP’s first release was their "Demo 89" along with the Blackout Records “Where The Wild Things Are” compilation. Soon after that they released the “East Side Story” e.p. and later the full lengths “Independent” and “Superlife”. In 2006 the band re-released their classic "Demo 89 / East Side Story e.p." on one disc, finally making the original demo available on CD in its entirety. In 2008, MP went back into the studio with the intent to capture the original elements of the bands sound and identity. Produced by Dan Korneff, who has worked with artists like (Grammy Nominated) Paramore, Lamb Of God and Ill Nino, the 15 new tracks sound absolutely massive and bring the band to a whole new level. Read more on Last.fm. User-contributed text is available under the Creative Commons By-SA License; additional terms may apply.