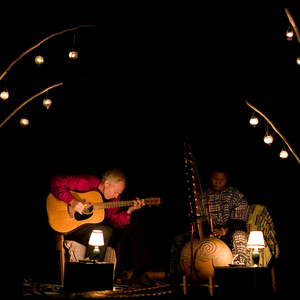 At the age of twenty, Michael chose to follow music as a spiritual practice rather than a profession. During ten years of travel, he sought to understand and connect with the source of great music and musicians, as well as to understand the spiritual and cultural evolution of his western heritage. This took him through Europe, Africa, Mexico and the United States, always looking to find musicians with a similar approach. In the early 90’s, after over twenty years or playing, Michael encountered the Amazonian healing ceremonies and their sacred chants, and was profoundly moved by the deep connection with the spirits of nature that he had known growing up in the remote forests of coastal British Columbia. Shortly after, he wrote his first composition (Earthgate – the opening track on Famous in Mongolia ), and G for Goddess. He sensed he had moved ahead musically. He played with no further advancement until the fall of 2004. Two weeks before participating in his second Amazonian healing ceremony, the music began to flow again. Thus, after 33 years of playing and composing only two songs, the rest of the music on The Medicine Path began to arrive, and did not stop until the spring of 2006. During this period, working with the Shipibo master healer Guillermo Arevalo, Michael experienced a complete disintegration of his previous approach to music. “I feel as if I started in the mountains and followed the tributaries through the valleys long and far enough, and then one day finally reached the sea. In front of me was the same sight that had inspired all my musical heroes.” He began He now lives in Victoria, Canada with his family. He performs locally and internationally, teaming up in 2008 with the Ugandan musician Kinobe, forming the world music duo 'Nomad'.. Michael produces and distributes his music through his own label, Ladybird Music. For more see www.ladybirdmusic.com Read more on Last.fm. User-contributed text is available under the Creative Commons By-SA License; additional terms may apply.