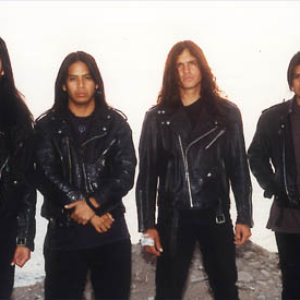 There are at least 7 bands with the name Mortem. (1) Mortem hails from Lima, Peru. They formed back in 1986 by brothers Alvaro Amduscias (drums/vocals) and Fernán Nebiros (all guitars) Through the years and having very little support from the worldwide scene as a result of being from a Southamerican country and after countless line-up changes, they recorded 4 demos but still remained almost unknown to the rest of the world, where only few people and zines got to listen to these tapes. But from these few the response was always the same: they were marvelled by the spirit Mortem's music transmitted. They were even hailed by some as an "important piece of Southamerica's Underground Metal Scene History". These remarks caught the attention of a peruvian label that released their debut album called "Demon Tales", then reissued under the German label Merciless Records, which signed the band for a 2 record deal. In 1998 the band released their second full-length album called "The Devil Speaks in Tongues" which got only excellent reviews in the underground metal press worldwide. In the year 2000 Mortem proudly present their 3rd opus: "Decomposed By Possession" under Merciless Records, a 9 track Death Metal assault (+ 2 covers) that shows the band is there to prove Extreme Metal is far from being dead. Refreshing from the beginning to the end, this album explores all the possibilities of their genre without losing their authenticity for a second, nor their devotion to the occult. Extreme heaviness, mid tempos & corpsegrinding speed. This is a true lesson in Extreme Metal and a must for everyone who claims to be a true metaller. Music played in the most authentic Metal tradition. 2004: The band signs with Underground Cult label Iron Pegasus and recorded their fourth attack. 2005: "De Natura Daemonun" is the name chosen for the fourth album... Now, in 2007, the EP/MCD "Devoted to Evil" has just been issued through the Norwegian label Worship Him Records, containing two new versions of old songs, Sacrifice's cover "Afterlife" and three very raw pre-production tracks of 1999 and 2002. Likewise, the band's first official live CD, "Demonios atacan Los Angeles" will be released in January 2007 through the Peruvian label Heavier Records. (2) Mortem is a brutal death metal band from Russia. They formed in 1989 and recorded their first demo in that year and got approached by a label Moroz. But the debut album "Amputator" took alot longer than aspected and finally got produced and recorded in 1993. After the debut the band dissappeared from view and wasn't seen untill their second release by Musickness / Metal Agen records called "Filicide" in 2000. And got their break through after this in 2001 they signed to Warpath Records and have recorded consistently over the last years with "Death Is My Name" being the debut for Warpath Records in 2002 to "Corpsophagia" in 2005 by a different label CD-Maximum and they are currently signed to them today. 3) Karol Ziober also known as Mortem is a 23 year old polish drum and bass producer. After having his first release in 2010 on IM:LTD he started to built his reputation among the biggest names in the game. His tunes are now getting played across the globe by names like Alix Perez, Dbridge, SpectraSoul, Kasra, Lenzman, Dj Hype to name a few... His last release "The Touch" (which in addition was remixed by Sabre) was a big step forward for Mortem, which opened the doors for the biggest labels around. His another recent release which was out on Critical: Modulations made him one of the freshest talent to watch. Talking about Critical - Mortems track called "Uprising" was featured in labels boss Kasra in his FabricLive #62 mix CD. By that fact many more labels are now interested in his music including the mighty Metalheadz that will release his track as a part of their EP project. (4) Mortem was a Norwegian death metal band formed in 1987 and composed of Steinar "Sverd" (guitar), Jan "Hellhammer" (drums) and Marius Vold (vocals). Mortem released the "Slow Death" EP as a demo cassette, and later as a 7" EP on the French underground label Putrefaction Records. It's not correct to say that Mortem became Arcturus, as Mortem continued for a long time after Arcturus was formed, with loads of different members within their ranks. Mortem even reformed in the mid-nineties with a new line-up. (5) Mortem is a Hungarian Death Metal band formed in 2004. (6) Mortem was also a Mexican Death Metal band formed in 1986. Their only release was a demo called "La Historia de la Cripta" in 1987. (7) Mortem was also a Spanish Death Metal band formed in 2002. They released their only demo " Live In Marihouse" during the same year, and split-up when their drummer moved to Barcelona. Read more on Last.fm. User-contributed text is available under the Creative Commons By-SA License; additional terms may apply.