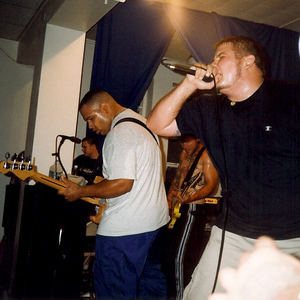 Mushmouth was the original incarnation of brutal PA hardcore band, now known as Out To Win. Out To Win was formed under the name Mushmouth during the Summer of 1995 in Reading, PA. After gaining a loyal following in the regional area, Mushmouth released a demo, "Thick as Thieves," and began playing shows all over the Northeast, including dates with bands like Madball and Earth Crisis. Following the addition of a new vocalist, the band entered the studio to record their debut full-length, "Out To Win," for Triple Crown Records. In 2000, Mushmouth released their second full-length ("Lift The Curse") for the label. In 2001, the band changed their name to Out To Win, underwent a few lineup changes, and began working on new material. In May of 2002, they released their latest effort, an EP entitled "Persist And Destroy" for Triple Crown. Read more on Last.fm. User-contributed text is available under the Creative Commons By-SA License; additional terms may apply.