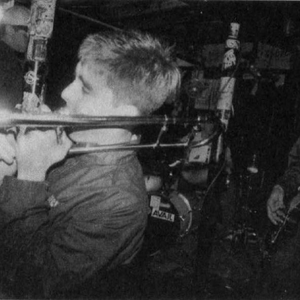 Native Nod was one of those pioneering bands from the early '90s which helped define the anxious, inordinately sincere roaring hardcore sound soon known as "emo," before that word fell into disrepute. Fronted by Chris Leo (brother of Ted Leo), who would later go on to form The Van Pelt and The Lapse, Native Nod featured many of the raw elements which would distinguish Leo's later bands: manic, skewed, spoken word and screamed vocals, nervous live-wire guitar playing, steady high-speed percussion, and a feeling of unbridled energy mixed with supreme angst, like these musicians wanted nothing more than to be able to jump out of their skins. Native Nod's legacy consists of only nine songs, which appeared on three early '90s seven-inches, "Bread," "Answers," and "Lower GI Bleed," and a Vermiform compilation called Fear of Smell. They're all collected on the Gern Blandsten album "Today Puberty, Tomorrow the World". It's a definitive recording from the formative days of the emo scene. Read more on Last.fm. User-contributed text is available under the Creative Commons By-SA License; additional terms may apply.