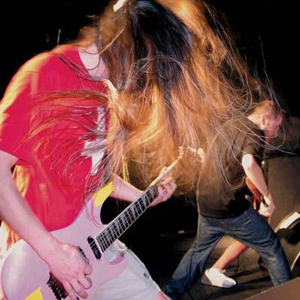 There are several groups performing under this moniker: 1) Metal/Hardcore band from Geneva 2) Disco from 1979 1) Brutality, devastation and precision are Nostromo’s 3 leitmotivs. Born from pain in 1996 within the prolific Genevan scene, Nostromo quickly found their own identity with a clever mix of metal/ hardcore sprinkled with thrash and grindcore influences. From demotapes to 7 inches, the band created their own style. Everybody was blasted by Nostromo’s maturity when they released their first album Argue in Autumn 1998 on the Genevan label Snuff Records (Knut, Brazen, Fragment…). 9 ultra-furious-as regular-as-clockwork songs, killer double-drum kick and pure brutality riffs led by a strong hardcore 'on-the-verge-of-rupture' singing. The band would keep growing in the following years. After playing shows with bands like Napalm Death and Turmoil, Nostromo released their sophomore effort in July 2000 on Mosh Bart Industries (now Bisect Bleep Industries). Eyesore proved their ability to self-revive their own style by putting more and more ferocity, precision, and emotion into it. In october of 2002, Eyesore’s successor was released on Overcome Records. Recorded by Miesko (singer/ guitarist in Nasum), the album even more technical and provided a few musical openings demonstrating the evergrowing maturity of our four metal-heads’ universe. An extreme music album, finely built and thought, where grind-madness and relaxing accoustic parts are combined, where shouts become silence and let dancing breaks stun the listener’s brain. Nostromo simply overcame the status of promising-band through the tours and the years. Here, energy is raw and direct, deprived of any teen-demagogic-tasting fancy dresses or tricks, focusing on sincerity and an everlasting friendly good mood. A honest old-school mind, deeply human, which allowed the band to gather various and numerous debut-fans. Counting a lot on its live shows, the contact with the audience, the band would continue touring Europe, spreading its unique style. Unfortunately, after releasing an acoustic album, Hysteron - Proteron (2004), the band split up in 2005. To quote their own website, «Nostromo is fucking dead». Jérôme (guitars) now plays in Mumakil. 2) 1979. A mining ship, investigating a suspected SOS, lands on a distant planet. The crew discovers some strange creatures and investigates. Read more on Last.fm. User-contributed text is available under the Creative Commons By-SA License; additional terms may apply.