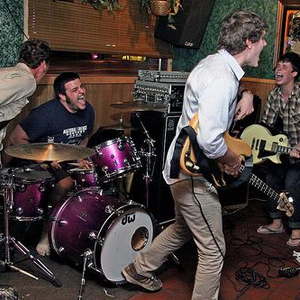 There are (7) artists with the artist name OCEANS: (1)Oceans were a post-rock, primarily instrumental band from Urbana and Chicago, Illinois formed in the fall of 2005 at the University of Illinois at Champaign-Urbana. Oceans is Ryan Martin, Nick Wakim, Keith Marek, Mike Parkinson, and Luis Belorin. Oceans released a full length album, Nothing Collapses, in early 2009 on Copper Lung Records. Members have gone on to play in CSTVT and Victor! fix the Sun www.myspace.com/broceans --- (2)Oceans are an Hardcore/Progressive band based in Burlington, Ontario. www.myspace.com/oceansband The Great Divide In a time when music is readily available through a Google search and one click of the mouse, it is also a time for a new beginning. We know the stakes and the saturation of bands out there, and we know it’s impossible to stand out in the crowd without creating a scene or something new. So we’ve decided that because of your support and interest, our album should be available online for free. …And all it takes is one click. We don’t need to obey the typical formula for promoting our band but we do need you and your support. The Great Divide is an album about fighting for what it is you want and believe in; we are fighting to make it our own because this is what we live and breath for. The world fights against you every step of the way, but integrity prevails. Change the old. Oceans Since 2006 Burlington’s Oceans has been stealing attention and lighting up local stages as one of Southern Ontario’s most promising bands. Their blend of progressive yet melodic hardcore has ushered them to play alongside such acts as Misery Signals, Cancer Bats, Bury Your Dead and Blessed By A Broken Heart, while their energetic live show has put them on the radar and in high demand to journey across the rest of Canada. In 2007 the band entered Sundown Studios and recorded their debut self-titled EP (which includes crowd favourite and tribute to Nick Hurlbut, Dinner Jazz and a Tom Collins) followed by The November Demos. And now, armed with their debut full-length The Great Divide, Oceans will certainly swallow the accolades of fans and industry professionals alike. “On this album I think listeners will notice a new kind of catchiness and relatability through songs that are meant to encourage hope and positivity amongst people and the music scene,” says guitarist Jamie Ricottone. “So many times we were uncertain of the future of our band and self-destruction was always on the horizon. But we thought hard and told ourselves that hard work would pay off, and that’s how the full-length came to be. We want this album to shake the scene awake.” The Great Divide not only represents Oceans’ perseverance and faith in their capabilities and music scene itself, but it also hinders a sense of generosity as they’ve elected to make the entire album downloadable online for free. And as 2009 continues to unfold and intermingle with a barrage of tour dates, Oceans will create the waves to lift fans up and take them to a place of musical euphoria. myspace.com/oceansband www.thesoundofoceans.com --- 3) Oceans is a rock band from Hardinxveld, Netherlands. 4) Oceans is an experimental artist from Hobart, Australia. http://www.myspace.com/wearetheoceanpeople 5) Oceans are an alternative rock band from Leeds, UK. www.oceansrock.com www.facebook.com/oceansofficial 6) Oceans are a post-hardcore band from San Diego, California. http://www.facebook.com/Oceans 7) Oceans, Finland. Oceans is the alias by which 19yr old Efe Tekkanat delivers his homespun tales of yearning and life. Efe had tried honing a songwriting style via former punk band BlindSide. Moving on from punk led Efe to Ableton Live, which in turn became an avenue for Efe to channel his style and deliver short electronic songs that best showcased his songwriting. Thus, Oceans was born. Read more on Last.fm. User-contributed text is available under the Creative Commons By-SA License; additional terms may apply.