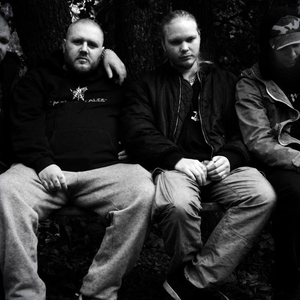 Taken from their Soundcloud page: Autumn 2011. Drabbad (Lepra, Suicide) had spent two and a half years institutionalized, after a suicide attempt which ended up with him being clinically dead for several minutes. He was now getting himself ready to face the outside world once again. Pessimisten, (Apati, there known as C9H13N) had recently disbanded his former band Apati, as a result of the death by overdose of one of the members. The two ended up with starting Ofdrykkja, and just a few months later, The Associate (Death under siege, Suicide) Arkomann and Bödeln joined them. 'Ofdrykkja' means "excessive drinking" in Old Norse, and pretty much explains the theme of the lyrics and musical influence for the band. The main valuation of Ofdrykkja is to reflect our view of our contemporaries which often can be quite tangled and complex. But we try to be honest with what we do and do not exaggerate or fictitious catch on with the DSBM culture of total negativity. Though we sometimes use extreme expressions (as a kind of visual art or authentic presentations). But those incidents that rarely happens and affects the members of the band are unfortunately parts of our lives. In 2015, Johan Gabrielson (ex-lifelover, ex-vanhelga, eskapi) joined the band to serve as lyricist and vocalist alongside Pessimisten Read more on Last.fm. User-contributed text is available under the Creative Commons By-SA License; additional terms may apply.