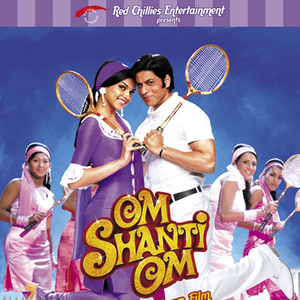 Om Shanti Om (Hindi: ओं शान्ति ऒं, Urdu: اوم شانتی اوم) is a Bollywood film directed and choreographed by Farah Khan. It stars Shah Rukh Khan and Deepika Padukone in the lead roles as the protagonists while Shreyas Talpade, Arjun Rampal, and Kirron Kher feature in supporting roles. Arjun Rampal is the antagonist in the movie. Guest appearances are made by many stars. Om Shanti Om opened across 878 cinemas and has since grossed around Rs. 656,500,000 in its two week record-breaking run in India. The movie was a hit at the U.S box office, grossing $1.7 million in its first three days, despite opening in only 114 theatres. Om Shanti Om became the biggest Bollywood movie of 2007 in the United Kingdom, earning a total of £972,146 (US $1,992,118 - INR 78,150,946). The film also collected a gross of over $19 million worldwide in the first week, including collection of $13.5 million in India and over $2 million in North America. To date, the film has grossed $39,426,031 (Rs. 157,70,41,000) worldwide. As of January 2008, the movie is the highest grossing Bollywood film of all time, and 2nd only to Sholay with inflation adjusted. Read more on Last.fm. User-contributed text is available under the Creative Commons By-SA License; additional terms may apply.