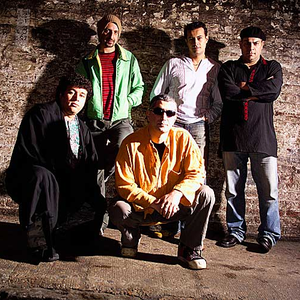 Neçmi Cavli, born in Turkey, emigrated to U.K. and became fascinated with some world fusion DJs in Glastonbury that used exotic music. He played around and improved a series of mixed music tracks that impressed others. Soon he was DJing more and eventually joined up with some other musicians and singers to form Oojami. Oojami fuses Turkish elements with a myriad of cultural traditions, providing a whirling dervish cyclone of sound with an uncompromising attitude towards musical freedom of expression. Bellydance Breakbeats is the very first product of this exotic combination. One of the tracks on the CD, "Fantasy," was featured in the film "Dirty Pretty Things," showing Audrey Tautou dancing to the song. Despite the album's name, the music is not like any other bellydancing CD and should not be confused with the various nouveau bellydance acts out there. Oojami's music is grounded in Turkish rhythyms and melodies with healthy doses of European techno and electronica. Bellydancing Breakbeats is at times very fast and furious but still retains solid melodic structure. Their second album, Urban Dervish, as less frenzied but still along the same themes. Read more on Last.fm. User-contributed text is available under the Creative Commons By-SA License; additional terms may apply.