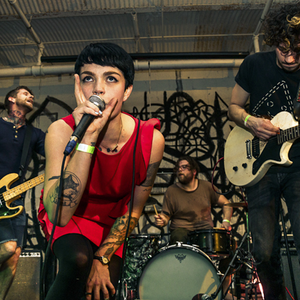 Perfect Pussy are an American rock band, formed in 2012 in Syracuse, New York, USA. The band consists of vocalist Meredith Graves, guitarist Ray McAndrew, keyboardist Shaun Sutkus, bass guitarist Greg Ambler and drummer Garrett Koloski. The band is known for its "frenetic brand of punk and raucous live shows" and has been described as "the most important punk band to come out of Syracuse since Earth Crisis." Prior to the formation of the band, the lead singer Meredith Graves led a band called Mouse and the Love & Light Orkestra, and more recently was a member of the Syracuse-based noise rock trio Shoppers. After Shoppers broke up, she was approached by the film director Scott Coffey in 2012, who asked her to perform with a band for his movie, Adult World. She assembled a "fake band" and wrote the song for the film. In the aftermath of the filming, they kept performing together. The band gained attention with its debut demo EP, I Have Lost All Desire for Feeling, which was released independently in 2013. They performed in CMJ music festival in 2013 and in SXSW in 2014, after signing to the Brooklyn-based Captured Tracks record label. The band's debut album, Say Yes to Love, was released in March 2014. http://perfectpussyband.tumblr.com Read more on Last.fm. User-contributed text is available under the Creative Commons By-SA License; additional terms may apply.