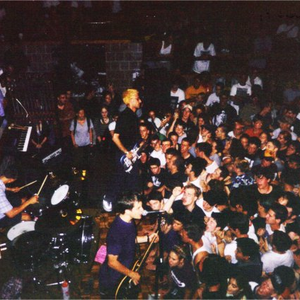 Plow United is an American rock group formed in Wilmington, Delaware, The United States of America in 1992. They play fast punk rock with pop, thrashcore and hardcore influences. Their lyrics are sometimes labelled "emo" postfact. Band members are Brian McGee (vocals and guitar), Sean Rule (drums) and Joel Tannenbaum (bass). McGee, Rule and Tannenbaum met at a private high school in Wilmington, Delaware in 1989. In 1992 they formed a band called Plow and recorded a six-song demo entitled Warped Sense of Humor and included "Pearl Jam." In 1994, Joel moved to West Chester, Pennsylvania where the band had been forming friendships and playing with other local bands, and began working with the newly started Creep Records, whose base was the town of West Chester. They soon began to tour the northeastern United States and eventually took their music as far as Canada and California. In 1995 Plow changed its name to Plow United when a band of the same name from Baltimore, Maryland sent them a polite but firm letter claiming rights to the name. A reproduction of the letter can be found inside the cover of their eponymous debut album, which Creep Records released that same year. With a full-length album under their belts, Plow United's credibility grew and they toured nationally and played with established punk rock acts like Lagwagon, At the Drive-In, Buglite, Bouncing Souls and Good Riddance. In 1996 the band recorded and released their second record, Goodnight Sellout, and Plow United received attention from major labels. They declined to pursue a career in rock and roll, however, and in 1997 the band broke up at the height of its popularity. In 1998 Creep Records released a posthumous third LP, Narcolepsy, known among fans as a darker take on the band's loose, aggressive pop punk sound. In 2000 Coolidge Records released The Dustbin of History, a compilation of singles and other non-album tracks. In 2011, the band reunited to play the inaugural Riot Fest East in Philadelphia, PA. During their set they were joined onstage by Exene Cervenka of X for a rendition of Here I Am, from singer Brian McGee's second solo album, The Taking or the Leaving. Their performance coincided with the release of Sleepwalk: A Retrospective, a 34 song compilation of material from the band's three studio albums, in addition to their numerous singles, EPs and compilation tracks. At Riot Fest East the band announced they would continue to play shows and had already begun writing a new album. Read more on Last.fm. User-contributed text is available under the Creative Commons By-SA License; additional terms may apply.