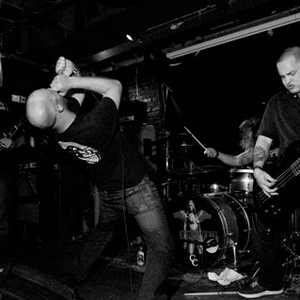 Formed in September of 2000 in Ohio, United States of America, Premonitions Of War was manifested by three close friends, M. Gaytan (guitar), P. Meyers (guitar) and D. Schoenhofer (drums) who had been playing in bands together for close to four years. Their overall dissatisfaction with the hardcore scene and the world in general inspired them to create music that would incorporate all of their influences - from metal to rock to electronic and more- while keeping their feet planted firmly in hardcore. "We're not a metal band - we don't have long hair and we don't wear bullet belts. We want to make music that will combine different types of heavy music without expressing the shortcomings of any of them. We like to keep people on their toes and bring in elements from music scenes generally geared towards older audiences while still keeping it interesting to us," said Gaytan. Premonitions oO War added two more members, T. Amstutz on vocals and A. Amstutz on bass to solidify their assemblage and started writing music. They released a self-titled EP in 2000 and started playing shows throughout the U.S. Next, they wrote and recorded the notable 'The True Face of Panic' released by Goodfellow Records in November of 2002, touring in support of it with bands like The Red Chord, Between the Buried and Me and The Black Dahlia Murder. In 2003 Premonitions Of War would see a lineup change that added B. Wharton on vocals and N. Hale on bass and the band now had a solid touring arrangement. They began garnering interest from various record labels and were approached by Victory Records in February of 2003, signing a deal with the label shortly thereafter. Premonitions Of War had already received outstanding press from the likes of Metal Maniacs, Terrorizer, MTV News and Outburn. The buzz on this band was building with unrelenting force. Premonitions Of War headed south to Tampa, FL to record their Victory Records premiere, "Left In Kowloon", in October of 2003 at Mana Recording Studios with Shawn Ohtani and Erik Rutan of Morbid Angel and Hate Eternal fame. M. Gaytan said, "Recording 'Kowloon' included a lot of late nights fueled by coffee and Cuban guava pastries. We worked through evenings and mornings for 3 weeks straight, which definitely added to the genuine bitterness and the emphatic bleakness of the recording. It was amazing to record with [Erik] Rutan as we've all looked up to the bands he's been in and the recordings that were done in this studio like Hate Eternal and Krisiun". Unsurpassingly volatile and irascible, Premonitions of War is a monstrosity that is ready to storm the front lines of the heavy music scene and "Left In Kowloon" is a paradigm that will go unmatched by today's standards of angst-ridden hardcore. After the release of "Kowloon", PoW had a few changes in lineup. Former drummer Dustin now plays with Walls of Jericho and was replaced by Cory Grady, who used to be in The Black Dahlia Murder. Bassist Nick Hale also left the group and now plays guitar in Burnt By The Sun. He was replaced by Danny Garcia, a friend of the band. Singer Brad Wharton also quit, and was replaced by Nate Johnson of Deadwater Drowning fame. This new lineup was featured most recently on the "Glorified Dirt + The True Face of Panic" album, which featured a re-recording of the long out of print first album with the new members as well as the hard to find and absolutely awesome "The True Face of Panic" EP. Nate Johnson officially joined Through the Eyes of the Dead, and was featured on their recording Malice, replacing Anthony Gunnels on vocals.Since then Nate Johnson left to do vocals for Since The Flood. Premonitions of War has been on hiatous for the past couple of years since then. Read more on Last.fm. User-contributed text is available under the Creative Commons By-SA License; additional terms may apply.