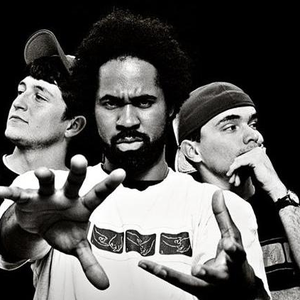 The trio – MC Wyzsztyk (pronounced wiz-stick), and DJs Dainja and Synthesis – weaves a complex web of beats and lyrical breakdowns that culminate in a heady and abstract cerebral stew. The Atlanta, Georgia trio (most popular for their spots on Adult Swim commercials) consists of emcee Mr. Wyzard, and DJs Synthesis and Dainja. Mr. Wyzard produces all but three of the tracks and his sound can be summed up as boom bap with a bouncy twist. With well thought out conceptual rhymes, tight beats, and excellent scratches and cuts from DJs Dainja and Synthesis, Psyche Origami is proof positive that rap music from the south can be so much more than the misogynistic zombie music that you see on television or hear on the radio. 4 Turntables: 1 Mic. A State-Of-The-Art Spin on the Foundations of Hip-hop. Dubbed "head-change music," Psyche Origami's material walks the thin line between "conscious" music and "party" music, with a live show that brings the content of the records to an even higher level. The three 12" singles cut from "Is Ellipsis," the first Psyche O full length, enjoyed heavy rotation on college radio nationwide and were a favorite of New York's SURE and California's Heavyweights record pools. The singles were also a top seller in the US and Japan through TRC Distribution. In 2004-05, PO toured 36 US markets. Due in large part to the exposure gained through this aggressive tour schedule, "Is Ellipsis" was picked up by RedEye Distribution and is available in Virgin Megastores, Borders Books and Music, Best Buy and an assortment of independent stores nationwide, as well as online through Amazon.com , I-Tunes, and sandboxautomatic.com. Sharing the stage with such heavyweights as Jurassic Five, Talib Kweli, and Ludacris, Psyche O has started to make itself known for entertaining shows that bring back the feel of the 'Golden Age' from which it was spawn. This Atlanta bred act has also been fortunate enough to have music featured on Cartoon Network's Adult Swim programming as well as various MTV and VH1 reality TV shows! "Get Gassed Up" is the second single to be released from the ambitious PO sophomore effort, "The Standard": a thematic album that uses a metaphorical gas station as a backdrop to convey thoughts centered around the idea that if the body is a vehicle, what would the gas station sound like that refueled it. "The Standard" is a mostly lighthearted Hip-hop exploration of the human condition and of the realities we create, and touches on themes such as convenience, motivation, and service. 'The Standard' reached 1 on the CMJ Music charts and held a top ten position for over 6 weeks. The 'Get Gassed Up' single was picked up by Fat Beats Distribution in August of 2006. After 'The Standard', Psyche Origami plans on extending its creative range with a project that is less thematic, but just as powerful in message and scope. "The idea is to keep the listeners on their toes. Our fans are a demanding bunch, and each time we raise the bar to satisy our previous fans as well as continuing to rope in new ones", says Mr. Wyzard, emcee/producer of Psyche Origami. With that said, look out for a new Psyche Origami album in 2009. Be sure to check www.psycheorigami.com for updates! Read more on Last.fm. User-contributed text is available under the Creative Commons By-SA License; additional terms may apply.