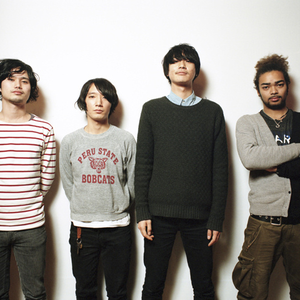 QUATTRO is a band formed by Takeshi Iwamoto (vocalist, guitarist) along with Nakajima Keizo (ex-bassist) and Yuichi Ushioda (guitarist). because Takeshi had left Japan to study in the UK, for a few moments QUATTRO activities at that time stopped and re-started after Takeshi return to Japan. in the early time, their image was Ramones-like, this is due to their love of garage music. about a year or two years after QUATTRO formed, they are forced to part with Yuichi Ushioda shortly after Yusuke Matsuzaka (guitarist) joined the band, his reason was for wanting to do something on his own. As long as he was not in QUATTRO, Yuichi did solo career. shortly thereafter, Kahadio Del Rosario joined QUATTRO as drummer. Kahadio claimed to be the youngest member in QUATTRO. after a while, Yuichi decided to re-join QUATTRO. their bassist, Masamichi Hamada was formerly the bassist of Riddim Saunter (now disbanded), he was originally offered to be a support member, but now QUATTRO fixed with five members, they are Takeshi Iwamoto, Yuichi Ushioda, Yusuke Matsuzaka, Masamichi Hamada and Kahadio Del Rosario. their music brings together 60's blues rock and psychedelic with 90's British rock. they make music with various genres with a catchy melody. Read more on Last.fm. User-contributed text is available under the Creative Commons By-SA License; additional terms may apply.