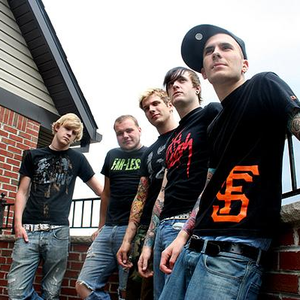 Race The Sun, a Powhatan based band interlaces a lyrical fabric of common themes with songwriting that is both identifiable and contextual. Interested in playing something more heartfelt and sincere, founding members James Henderson [vocals/guitar], Jason Sowers [vocals/guitar], and Chris Brown [drums] began writing songs in the sweltering summer of 2002 that combined their energetic punk/alt rock influences with pop and a touch of hardcore. The band drew influences from bands like Jimmy Eat World, Fairweather, and Fall Out Boy to seamlessly incorporate harmony and aggression into a rambunctious mix that is universally appealing. Like most young bands, Race The Sun went through several line-up changes before landing Josh Thomas, a long time friend, on bass and Daniel Long as lead vocalist. In late 2002, Race The Sun entered the studio with Andreas Magnusson [Scarlet] to record their self-released 5 song EP titled "Contents Of A Dead Man's Pocket." The album is excitingly genuine, showcasing their unspoiled melodies and unyielding harmonies. Creating a plan for success, the band set out on a guerrilla marketing campaign that involved Internet marketing and taking their CDs directly to potential fans in malls and colleges. Their talent, hard work and determination helped them find immediate success as local radio stations began playing "Casted Shadow." The band succeeded in selling an astounding 3,500 copies of the EP, building a strong underground following of self-made fans. Since the band's inception, they have amassed a large and devoted hometown crowd, largely thanks to their energetic and raw live shows. From large venues to basements, the band worked to widen their hold on audiences and to toured the East Coast where they performed with a wide range of bands, from Fall Out Boy to Spitalfield to Hey Mercedes, Acceptance to Jamison Parker, Count The Stars, River City High, and The Early November. By the second half of 2003 Race The Sun signed to Fidelity Records and released their debut album in September of 2004 titled The Rest Of Our Lives Is Tonight. The album was produced and Engineered by Jesse Cannon [A Static Lullaby, Senses Fail, Hot Rod Circuit, Northstar, The Cure] and Mastered by Alan Douches [Thrice, Hot Water Music, Jets to Brazil, Saves The Day, Brand New, Alakaline Trio]. The result is a carefully crafted 11 track LP; built for sing alongs and delivering brilliantly inspirational messages while conjuring up images of youthful, innocent, and carefree afternoons under Virginian skies. Renowned Producer/Director Darren Doane [Thursday, Blink 182, Jimmy Eat World, Thrice, AFI, Deftones, A Static Lullaby] was brought aboard and filmed Race The Sun's premiere video for their first single "Solo Tonight." Released in conjunction with their debut album, the video cleverly captures the essence of who these boys are where they come from. This Band?s sheer energy and passion is nothing less than sincere and is testament to their savvy sense of their pop-punk roots. Perhaps the band says it best themselves; "The music is fun to listen to and at the same time, the lyrics give a positive message to never give up... something we try to show through our willingness to sacrifice and work hard at our dream of Race The Sun." Read more on Last.fm. User-contributed text is available under the Creative Commons By-SA License; additional terms may apply.