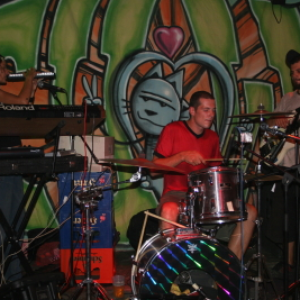 Radikal Dub Kolektiv was born in spring 2002. At first it was a trio made of boys who played together before in bands such as Radikalna promjena, Nula, Abrakha-dub-r and who’s music roots were the same/similar. And so these 3 boys (very baaad, but still – very honest:) started to experiment with music, combining different influences into a big melodic mixture, with a dub-reggae background. On the way they’ve realized that it’s pretty boring to play as a trio, so they’ve decided to put in some electronic sound (synthesizers, sampler) as well as warmth (saxophone) – and they became a collective. (Vax - synthesizers, melodica, vocals; Korx – saxophone; Bole – saxophone; Jadranko – guitar, sound engineering; Vrx – bass; Sheki – sampler; Jebiga – drums; Mirda- sound engineering, effects) The band was from the start very active in creating music and playing concerts. Since the music is the main impulse that makes everything expressible, the next step was an idea of making your own sound system, basis of which are electronic sounds, melodies, spoken word-or-two.. Until now the band members reduced to 5 (bass/drums/keyboards/guitar/soud engineer). Read more on Last.fm. User-contributed text is available under the Creative Commons By-SA License; additional terms may apply.