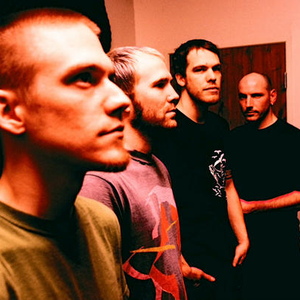 Red Animal War is an indie rock / post hardcore band from Dallas, Texas that is one of the most original bands of their genre (which is often questionable). Mixing elements of math and progressive rock into dark drum and bass beats (and a voice that can be very hooky), they often are compared to some of the most technical bands out there. The band came together in 1999 with musical friends Justin Wilson (guitar/vocals), Jeff Wilganowski (drums), Brian Pho (bass), and Matt Pitman (guitar). They've perfected their emo style for something charming and desirable, allowing Deep Elm to take interest in the band and inking them a deal in late 1999. They spent most of 2000 recording in Deedle's Room in Austin, TX, recording what would become a full-length studio effort. The fruit of those sessions was Breaking in an Angel (2001,) plus a split disc with Slowride. The next year, the more complex and ferocious Black Phantom Crusades was released in the fall. Brian quit the band while in Europe touring. Jeff Meaningless was flown out and soon became the permanent replacement. 2004 saw the release of Polizida, recorded by J. Robbins (Against Me!, Jets To Brazil, Dismemberment Plan) which was released through the Ice Planet label. Their latest release, Seven Year War was released in 2006 on END sounds. The band had this to say about the release: This album came together after it became clear that our music was not getting the distribution it deserves. With End Sounds, we have found American, European, and Japanese distribution with Koch, who was the distributior for Epitaph Records for many years. Koch makes our music available to almost anyone that wants to hear it. Orders will be taken through the End Sounds website for anyone that cannot find it in their local stores. The music is a collection of songs, new and old, that best represent the band since it's inception in 1998. Some of the tracks were recorded at The Hit Factory in NYC, some with J. Robbins at the Echo Lab in Denton, TX, some at Deedle's Room Recording, one at Mad River Post, which is easily the biggest room any of us have ever recorded in, and two of the tracks are early live recordings in two of Dallas's best clubs. This release will be enhanced and will include 9 music videos, two of which were directed by Travis Kopach, who's done videos for Matchbook Romance, The Juliana Theory, Koufax, and Straylight Run. The live songs featured on the audio section of the disc will have corresponding videos, two videos will be for songs from our 3rd full-length, "Polizida". The artwork and tracklisting were left up completely up to the band, so for first time we can say we are giving our fans a record that looks and sounds exactly the way we wanted it to. Any song that first appeared on a 7-inch or CD compilation has been re-mastered from the original recording and sounds 100% better. We totally appreciate the fans that have stuck by our side and to them we say a warm thank you for buying this record that really means something to us. This release is packed to the gills with material and we hope you enjoy it. ---- 2006 saw several changes within the band. Jeff Meaningless and Jeff Wilganowski quit the band. Replacing them was Todd Harwell (Flickerstick) on drums and Blake Young (Without Sound) on bass. The band has remained somewhat silent in the past year after canceling their summer tour. Read more on Last.fm. User-contributed text is available under the Creative Commons By-SA License; additional terms may apply.