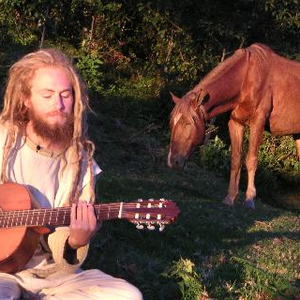 Whether singing the ancient Sanskrit mantras of India, the traditional folklore songs of South America, or performing his original works of divine inspiration, Shimshai’s music invokes a sentiment of ancestral devotion and a dedication to higher consciousness. A self-proclaimed seeker of truth, described by many as possessing the voice of an angel, Shimshai is gifted with the innate ability to deliver his message flawlessly in several languages; most profoundly the universal language of Love and Oneness. Surrounded by music from birth and formally trained on piano in his native state of Washington, today Shimshai performs effortlessly on guitar, sitar, flute, and a variety of woodwinds. He plays many of the instruments on his self-composed and self-produced albums, ‘I sense your Presence’ (2001), ‘Toward the One’ (2003/2006), and ‘Live on Maui’ (2003/2006) all which have been highly revered by the worldwide spiritual community. His collaboration with fellow artist Tina Malia, ‘Jaya Bhagavan’ (2004), has also been met with tremendous success, being signed to the independent record label Spirit Voyage in 2005, and his most recent release, ‘Deliverance’ (2006), showcases his abilities as a solo performer. He continues to offer his talents to various studio projects, including current collaborations with traditional healers and several undertakings with indigenous communities throughout south and Latin America. Whether playing at large festivals, yoga studios, or spiritual retreats, Shimshai’s live performances throughout the Hawaiian Islands, Europe, Australia, Mexico and The Americas have helped to create a devoted and ever-growing global fan base. His unique blend of reggae, jazz, kirtan, and folk, infused with a worldbeat influence, provides a diverse palette of musical expression and attracts a wide range of listeners. Performing solo or with his group, The Natural MystiquEnsemble, which features percussion, guitar accompaniment, and harmony vocals, Shimshai’s energy always provides a sacred, intimate, heart-opening space for all who are present. Along the way, Shimshai has had the honor of opening for and sharing the stage with such luminaries as Michael Franti, David Grisman, Mickey Hart, Jai Uttal, Ram Dass, Deepak Chopra, Bhagavan Das, Dezarie & members of midnite, jah levi, Hamsa Lila, Sasha Butterfly, and many other gifted musicians and visionaries. Read more on Last.fm. User-contributed text is available under the Creative Commons By-SA License; additional terms may apply.