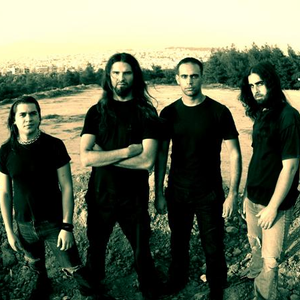 Sickening Horror was created on January 2002 by George Antipatis (guitars, vocals), Ilias Daras (bass) and George Kollias (drums) to explore the boundaries of extreme music. At first the band was influenced mostly by technical Death Metal and released a 3-song demo cd, simply entitled "Promo 2003". At the time, George Bokos was on the 2nd guitar for a while. As time passed the band incorporated many diverse elements in its music, from experimental black metal to jazz and industrial. The soundscapes got more multi-layered, which is evident on the debut album "When Landscapes Bled Backwards". The album was released on June 2007 through Neurotic Records and got great reviews for its innovative sound. The mixing was done by none other than Neil Kernon. On February 2007 the band decided to continue without George Kollias, who was replaced by Jose Theodorakis. On March 2008 the band embarked for its first tour along with Immolation, Melechesh and Goatwhore. The tour was amazing and consisted of 24 shows all over Europe. After the tour, the band recorded its 2nd album entitled "The Dead End Experiment". The recordings took place at Portal studio and the band was in total charge of the production / mixing / mastering. The new album will be released in 2009. Read more on Last.fm. User-contributed text is available under the Creative Commons By-SA License; additional terms may apply.