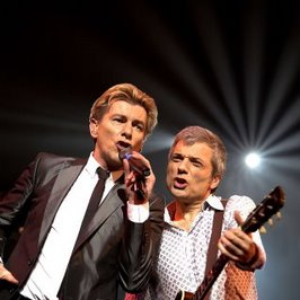 Soulsister is a Belgian music band consisting of musicians Jan Leyers and Paul Michiels. SoulSister (also known as the Soul Sisters and Leyers, Michiels, and SoulSister) ran from 1986 until 1995 and performed a mix of pop and soul. They will reunite at The Night of the Proms in 2007. Jan Leyers had previous experience in the rock group Beri-Beri, while Paul had experience in the British-Belgian rock group Octopus and as a solo artist. The group formed in 1986 after Jan and Paul met each other in Paul's hometown of Heist-op-den-Berg (Jan, for his part, is a native of Wilrijk). They debuted that year under the name the Soul Sisters with a single titled "You Get to Me." Later on, they also release the singles "Talk About It" and "Like a Mountain." They had a huge hit with "The Way To Your Heart", a Motown-sounding song which even made the lower reaches of the Billboard Hot 100 in the United States while also achieving success in Belgium, the Netherlands, and Germany. In 1988, the group changed its name to SoulSister and their first official album, "It Takes Two," was released, with Paul on the keyboards and Jan on the guitar, with various men on back-up. EMI signs the deal and publishes the album. In 1990, the two gentlemen underwent another change in name, this time to Leyers, Michiels, and SoulSister. Later that same year, they release Heat, which includes hit singles "Through Before We Started," "Sweet Dreamer," and "Well Well Well." Some of the songs on the album allowed Jan Leyers, who was admittedly more into rock music than soul, show off his skills on the electric guitar. The group started a triple run in 1992. That year, they released the album Simple Rule, which included a hit title track, as well as "Broken" and "Ain't That Simple." The following year, in 1993, the group released a live album, Live Savings. In the meantime, Jan is asked to co-write "That's As Close as I Get To...", a song that is sung by American country singer Aaron Tippin. In 1994, the group begins its final chapter with the album "Swinging Like Big Dogs." Popular tracks off of this album are "Wild Love Affair," "If This is Love," "Tell Me What it Takes," and "I Need Some Time." By this time, the group has gone back to being known simply as SoulSister. In 1995, SoulSister split. Two years later, EMI releases a "Very Best Of" compilation album. Meanwhile, both men go their separate ways. Paul Michiels goes solo and performs the same soulful, Motown-sounding music that made SoulSister a success, while Jan Leyers joins with Filip Cauwelier and Joost Van den Broek to play hard rock music as the band My Velma (named after a character in the Raymond Chandler novel Farewell, My Lovely). Jan and Paul teamed up again in 2000 to record individual songs for the Jan Verheyen movie Team Spirit. Jan performed a track titled "Only Your Love Will Do" while Paul recorded a piece titled "Shine Your Light on Me." In 2007 the news was announced Soulsister will reunite for a special concert in 2008. They will play the Sports Palace in Antwerp on March 1. Exactly 20 years after the release of their first album, and 12 years after their split. Read more on Last.fm. User-contributed text is available under the Creative Commons By-SA License; additional terms may apply.