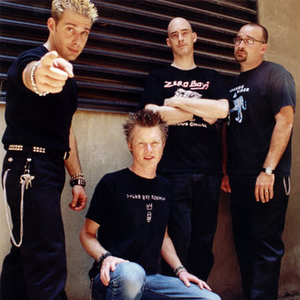 SQUIRTGUN was founded by pop-punk producer Mass Giorgini, whose credits include Alkaline Trio, Rise Against, Anti-Flag, and even work as co-producer with Billie Joe Armstrong of Green Day. SQUIRTGUN first came to national attention when their song “Social” was featured as the opening song on the soundtrack to the Kevin Smith film MALLRATS, which has since become a cult classic. Later, they cemented their position in the punk-rock pantheon with their song “Mary Ann,” which was made into a video which reached the top 40 alternative videos on MTV and which featured a guest appearance by Dawn Wells (the actress who played “Mary Ann” on Gilligan’s Island). SQUIRTGUN was among the several bands of the pop-punk movement which were on the now-legendary Lookout Records roster, which also featured bands such as GREEN DAY and OPERATION IVY. SQUIRTGUN is on one side a pop-punk band in the tradition of GREEN DAY or SCREECHING WEASEL, and, in fact, two members of SQUIRTGUN are 8-year veterans of SCREECHING WEASEL. However, SQUIRTGUN also infuses reggae and ska influences into their sound, in a manner similar to OPERATION IVY – and, as it so happens, two members of SQUIRTGUN spent 3 years as part of a trio called COMMON RIDER featuring OPERATION IVY lead singer Jesse Michaels. In fact, members of SQUIRTGUN have served in several well-recognized bands in the world of punk rock, including ALKALINE TRIO, RISE AGAINST, the SMOKING POPES, the QUEERS, SCREECHING WEASEL, COMMON RIDER, the RIVERDALES, and others. SQUIRTGUN songs range from melodic songs about love and relationships to raging socio-political anthems opposing racism, homophobia, and tyranny. Read more on Last.fm. User-contributed text is available under the Creative Commons By-SA License; additional terms may apply.