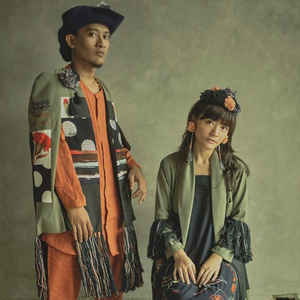 Stars and Rabbit, an Indonesian folk music duo, formed in early 2011 in Yogyakarta. The group consisted of singer-songwriter Elda Suryani (born May 29, 1983) and musician Adi Widodo (born July 31, 1983). Their single 'Worth It' drew them attention from a small variety of communities in Indonesia and the United Kingdom, as part of the indie pop/folk scene. Stars and Rabbit engages a do-it-yourself approach to writing and recording. Their music is a melding of pop and folk influences with raw simplicity of composition, arrangement, and performance. Elda first appearance as a professional musician in the early 2000s, as a singer in a cafe band, Candles. She was demanded to be able to sing any kind of music that was popular at that time, from pop to rock, even R&B hiphop to jazz. In her teenage years, she always caught up with alternatives music. So, its been an inspiring journey for her musical knowledge. Adi himself was a fans of Elda when she led her band, before they knew each other in 2004. He became a session musician which ever supported Elda performances with for several times Afterwards Elda followed a reality show audition in the middle of 2006. She had no idea what she got into yet she came up as the winner and became the lead singer of a rock band that held the audition, eVo. On their 2007 self-titled album, a contract has signed with major label Sony-BMG Indonesia. She began to work on completing what would be their first studio album with its first mainstream single 'Aggresive'. The band took a hiatus after a short time of promoting period. During the hiatus, 2008 – 2010, Elda worked as a fashion stylist for several free magazines at Jakarta, afterwards she opened a second hands & handmade shop called Little Garage with her bestiest in Yogyakarta till now. Early 2011, she decided to meet up her fellow musician,Adi, to continued her burried passion and start a new project then began record her new songs. The project then became a duo, calling themselves Stars and Rabbit, and first performed publicly on September 2011 at Prambors On The Move roadshow in Jakarta. As one of their songs became a soundtrack for one of prambors radio program by that time. Read more on Last.fm. User-contributed text is available under the Creative Commons By-SA License; additional terms may apply.