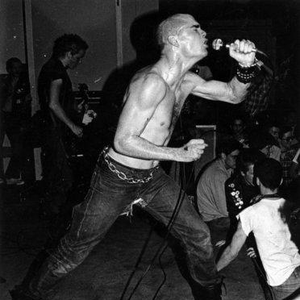 Henry Garfield was part of the original skater clique that made up the core of the early DC hardcore scene, but early on his participation was limited to being a roadie for the Teen Idles, which featured his close friend Ian MacKaye. When MacKaye formed Minor Threat, his follow up act to the Teen Idles, he swiped Lyle Preslar from the band the Extorts. The Extorts had played only one show before Lyle, the band's singer, left. Jumping at the chance to launch his own musical venture, Henry and the remaining Extorts, guitarist Michael Hampton, bassist Wendel Blow, and drummer Simon Jacobsen, formed State of Alert, better known as S.O.A., in 1980. The introduction of bands like S.O.A. and Minor Threat signaled a change in the mood of the DC hardcore scene. Early hardcore acts like the Teen Idles and the Untouchables had a light-hearted vibe. Songs were often goofy and humorous and few ever approached any sort of serious subject. The new crop of bands that formed, though, like S.O.A., Minor Threat and Youth Brigade, were angrier and projected a tougher image. S.O.A. was a perfect example of this. Musically not as strong as their peers in Minor Threat, their style was simple thrash with Henry's monotone bark on top of the mix. The songs were usually about things that made Henry mad, like girls and cops, or his love of fighting. Despite their rudimentary style and limited musical ability, S.O.A.'s live performances were reportedly exhilarating. After several shows, Simon left the band to attend college. He was replaced by Ivor Hanson. Dischord Records wanted to put out an S.O.A. release, but the infant label also wanted to put out a record by Minor Threat and there was not enough money to do both. The band had already recorded while Simon was in the group, so Henry solved the problem by paying for pressing of the record himself with money he saved while working as a manager at an ice cream store. While things were looking up for S.O.A., fate would soon intervene. Henry was offered a chance to audition for LA's Black Flag. After practicing with the band in New York, he was asked to join as their singer. Word of Henry's new gig soon filtered back to Henry's friends in DC, who had mixed feelings about his imminent departure for the west coast. The rest of S.O.A. was particularly disillusioned, as it would likely mean the end of the band. S.O.A.'s last gig was in Philadelphia opening for Black Flag, after which Henry left town with that band. Henry had approached Ian MacKaye's younger brother Alec about taking over for him in S.O.A., but Alec didn't want to sing Henry's words. Instead, he, along with Michael Hampton and Ivor Hanson, formed the Faith, while Wendel Blow joined proto-skinhead act Iron Cross and later co-founded Lethal Intent. Henry, after changing his last name to Rollins, went on to sing for Black Flag until their demise in 1986. Read more on Last.fm. User-contributed text is available under the Creative Commons By-SA License; additional terms may apply.