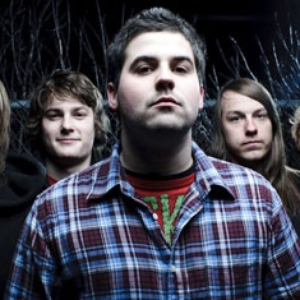 STRAIGHT READS THE LINE was a 5-piece melodic metalcore band hailing from Stoney Creek, Ontario, Canada. The band formed in late 2004 when a few bands in the area such as An Angels Fall and Among The Ruin retired. The band played it's final string of shows in Spring of 2010. Straight Reads The Line has recorded previous demos along with their most recent 8-song EP entitled Lets Get Nuts!" at Mastermind Studios in Hamilton, which features a guest appearance by Dallas Green of Alexisonfire. The cd was recorded, pressed and distributed independantly by the band. STRAIGHT READS THE LINE have been able to retire the word "chaos" from the dictionary, because they redefine it. Their non-stop, high-energy performance is mindblowing and irreversibly beautiful. But also is as frantic and destructive as a grizzly murder scene. STRAIGHT READS THE LINE rethink the idea of simplistic power chords and breakdowns and change them to a complex string of ideas, thoughts and emotions. Thier overall power in thier music can only be surpassed by thier overall power on stage. They are currently embarking on a 30 day Cross Canada Tour with Dead and Divine (Verona Records) and The Holly Springs Disaster. The band plans to record a new record and tour extensivly throughout the year. With such talent and live energy at their expense, theres no stopping STRAIGHT READS THE LINE, five alcohol-induced, whore-mongling, incoherent hoolagans on thier plot for local and international domination. "Suddenly, on Josh's 18th year, from a massive asthma attack, he sadly passed away. Josh was a proud leading member of the band and his long time passion for music and outstanding abilities led his life. "His guitar" , "his music", "his friends", thats what he loved. Josh is survived by his father Marty, mother Tina, sister Nicole, and grandparents Gloria and Alistair Mackenzie and Heather and Don Hesse. He will also be deeply missed by his aunt Karen , Uncles Perry and Donny, great grandparents and numerous friends whom he loved as much as they loved him. He will be sadly missed but never forgotten. " We, as Josh's best friends and band mates, highly encourage anyone and everyone to listen to his personal songs and solo-side project. Read more on Last.fm. User-contributed text is available under the Creative Commons By-SA License; additional terms may apply.