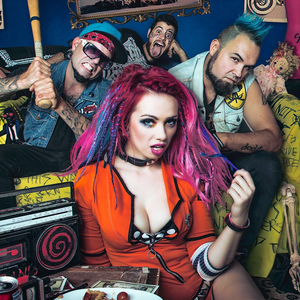 Sumo Cyco is a Toronto based four-piece hybrid of punk, metal and dancehall fronted by Juno nominated, Capitol Records recording artist Skye Sweetnam aka SEVER. Joined by MD13 (Guitar), THOR (Bass), and BONES (Drums), Sumo Cyco owns the stage like no band you’ve seen before. Capping the year off by winning Best Female Fronted Band at the 2011-2012 Toronto Independent Music Awards, Sumo Cyco has also played 2012's NXNE, Warped Tour Toronto and Indie Week without even releasing a record. Sumo Cyco's debut album is in the works along with the accompanying visual experience. Sumo Cyco has released a six track Live Sessions EP and seven singles with matching self-directed music videos, including tracks mixed by Canadian pros such as, Julius "Juice" Butty (Alexisonfire) and Matt DeMatteo (Big Wreck), Jag Tanna (I Mother Earth). Through use of the Internet, Sumo Cyco already has fans around the world, with hundreds of thousands of views on their videos and thousands on their social medias. One video in particular, went viral when Sever took a hit to the face with a ceiling fan while on set of their self-directed music video for a song called “Interceptor.” It was featured on youtube, on Ray William Johnson’s channel with over 5 million views, MTV’s Ridiculousness and the popular Fail Blog, which gained thousands of new fans for the band. The band name literally means: SUMO A Japanese form of wrestling in which a fighter loses if forced from the ring or if any part of his body except the soles of his feet touches the ground. CYCO A psychopath Full length Album was released Titled: Lost in Cyco City Read more on Last.fm. User-contributed text is available under the Creative Commons By-SA License; additional terms may apply.