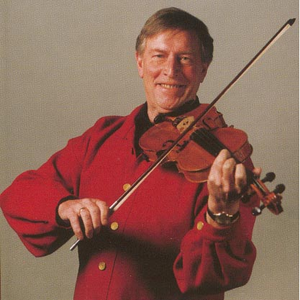 Outside of Scandinavia the best-known Norwegian fiddler would probably be Annbjorg Lien, but folk music purists are sure to prefer Sven Nyhus. Nyhus, along with Hans Brimi represents an archetype in Scandinavia, the stern-looking fiddler playing dance music, sometimes accompanied only by his own foot stomping out the beat. Sven Nyhus (b. 1932) is from the Østerdalen region of Norway. In this region the flatfele ("flat fiddle" or violin) predominates, but Nyhus sometimes plays the Handanger fiddle, the distinctively Norwegian version of the violin popular elsewhere in the country, an instrument rather like the Baroque viola d'amore, with four extra strings vibrating sympathetically under the first set. With his good ear and exceptional ability to transcribe music - no mean feat considering that Norwegian folk music does not keep to standard Western tone intervals - Nyhus became one of Scandinavia's great archivists of folk music. He is also one of its popular performers, playing for many years in a traditional dance band. Although he has had only one CD released in the U.S. (Traditional Norwegian Fiddle Music in 1991 on Shanachie), he has had several others released in Scandinavia. On the American album, he plays solo, but on the Scandinavian albums he usually plays as part of a quartet, quintet or sextet. Read more on Last.fm. User-contributed text is available under the Creative Commons By-SA License; additional terms may apply.