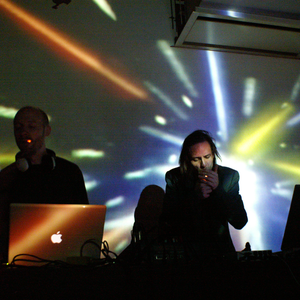 Alex Peverett and Chris Gladwin are Team Doyobi. Their sound has been influenced by various forms of electronic dance music (e.g. techno, electro, acid house, italo-disco, glitch, 8bit), as well as progressive rock, krautrock, noise, free jazz, and electro-acoustic and ambient music. Gladwin and Peverett met while attending school in the Linconshire Wolds, a culturally remote area on the east coast of England, and immediately began their creative partnership. Originally working together to produce analogue video art, their first joint expeditions into computer music began by producing their own soundtracks to these video pieces. Having grown up during the home computer boom of the 1980s they didnt have to look far to begin utilizing cheap and accessible technology. Using Commodore Amiga home computers running public domain software they began making collages of beats and melodies with 8-bit samplers. After producing several home made cassette releases under the name “Doyobi”, (picked at random out of a Japanese phrase book) they shifted their focus to performing live. Following a record studio launch party in the UK’s “techno city” Sheffield, their live show caught the attention of Brighton’s Fat-Cat records who quickly released the newly titled “Team” Doyobi’s first record as a split 12” with Req (WARP) in 1999. One of their early cassette releases had also found its way to Manchester’s Skam records who were keen to add them to their growing roster, alongside acts such as Boards of Canada, Bola, Gescom and Jega. In 2000 Skam released their first full EP "Pushchairs for Grownups” and the Team began regularly performing in the UK and throughout Europe as a part of the larger Skam crew. 2001 saw the release of Team Doyobi’s first full length album for Skam “Cryptoburners” and a very successful series of gigs in support of Autechre throughout the European leg of their “Confield” tour. Afterwards Gladwin and Peverett took time to develop their sound and also working on solo audio projects and multimedia art works, individual interests in video art and computer music which had preceded their initial collaboration. They have appeared on many compilations on labels like Warp (UK), Tigerbeat (USA), Spezialmaterial (Switzerland), Alku (Spain) and Active Suspension (France). A track submitted for the Japanese noise label ALEIN8 went to press unnoticed using a corrupted audio file of the original piece, the original version was later released. Reworking tracks for Sketch Show, N.W.A, Emilliana Torrini, Laurie Anderson, Goodiepal, Machinedrum, C64 Orchestra, Marco Passarani, Bogger, and others. Shortly before the release of their second album "Choose Your Own Adventure” (SKAM, 2004), Gladwin and Peverett showcased a range of new material at the Autechre-curated All Tomorrow's Parties, although under other guises their ATP performances have since numbered 5 times. After the bulk of Team Doyobi’s third full length album had been written, Peverett relocated to Japan, and he and Gladwin completed the project by collaborating over the internet. “The Kphanapic Fragments : Observing Spacial Anomalies in the Dynaflow, an amateur field guide (Heavy Light Cylinders CSR8-II through to MNN9-78 {vormathrom index}.”, finally appeared in 2006. They were subsequently invited by BBC Radio 1’s Mary Anne Hobbs invited to do a special 30 minute session, marking the third BBC Radio 1 show to play their music following repeated airplay from John Peel and a shorter session for the (now defunct) Breezeblock program. The most recent Team Doyobi EP, "ORCH V" was released by Skam in June 2009. The Team Doyobi Myspace page reports that another release, titled "Sixty-Four", is due out soon as well. Team Doyobi and UK electronic artist Skeksi are launching their own label, Icasea, on July 27, 2009. Read more on Last.fm. User-contributed text is available under the Creative Commons By-SA License; additional terms may apply.