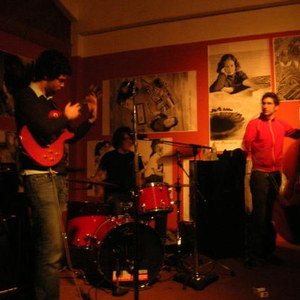 There are at least three artists called Tenebre: 1) Ténèbre (2014 —) is a techno project from France depicting the sprawling urban development of the surrounding megalopolis. SoundCloud: https://soundcloud.com/tenebre-audio Bandcamp: https://tenebre-audio.bandcamp.com/music 2) A post/math rock from the US. Taking their cues from 33.3, Don Caballero and Owls, the instrumental trio Tenebre have established themselves in the movement of San Francisco post-punk spearheaded by bands such as Deerhoof and The Aislers Set. Anything but a typical indie post-rock act, Tenebre are more concerned with creating beautiful soundscapes than imitating their influences. Both aggressive and subdued, flashy and tasteful, technically stunning and sincere, Tenebre's dense rhythmic structures, fluttering fret-tapped guitarwork, complex harmonization and dynamic instrumental interplay create a unique listening experience, equally impressive and beautiful. 3) Tenebre is a gothic rock/metal band from Sweden influenced by bands like The Damned, Sisters Of Mercy and 69 Eyes. These swedes have released 5 albums + a bunch of singles and a couple of vinyls, with the first album released in 1996. With the release of "Heart's Blood", in 2005, Tenebre became a little less metal and more gothic. The music is very much in the veins of the Sisters of Mercy, but one can also hear similarities to bands like Moonspell and Type O Negative. Members: Richard Lion - Guitars Michael Körner - Guitars and computers Jenny T - Bass Kalle Metz - Voices Andreas The Chef - Drums Ivana Satana - Keyboard myspace: http://www.myspace.com/tenebregoth Read more on Last.fm. User-contributed text is available under the Creative Commons By-SA License; additional terms may apply.