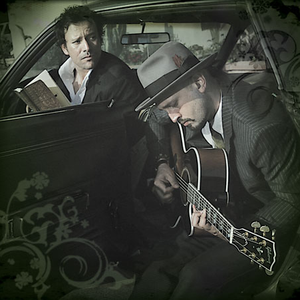 The Green Car Motel is a band that seamlessly fuses English and Spanish with the landscape of the Southwest. They make their home in Los Angeles, California. Founders and songwriters Rick Garcia and Rene Reyes grew up in San Diego, Texas. A small town 50 miles west of Corpus Christi. After relocating to Los Angeles they formed the band Act of Faith and went on to write and record three self released cd's. As The Green Car Motel they provided the end credit theme song to the 2004 Tom Cruise/Jamie Foxx blockbuster COLLATERAL. Reyes has played, recorded and toured with artists Michael McDermott and Katrina Carlson. He's also creditied with 2 self released(2005 and 2006) solo cd's for which he has toured behind. Reyes is planning additional solo tour dates in 2007. Meanwhile, Garcia found a home songwriting and singing songs for films. He has contributed songs towards the acclaimed films Brokeback Mountain which featured 3 songs. Also, songs for Domino, The Interpreter, Glory Road, American Dreamz, Thief(tv series) as well as others. He has remained busy writing and singing songs for numerous upcoming films due out in 2007. Garcia and Reyes have fired up The Green Car Motel and are currently in the studio recording their "official" debut cd due out in the spring of 2007. Tour dates around the world will follow. Read more on Last.fm. User-contributed text is available under the Creative Commons By-SA License; additional terms may apply.