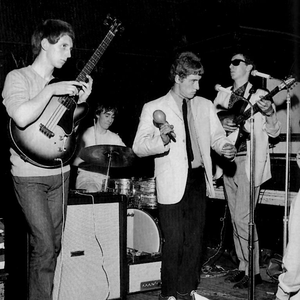 The High Numbers was a short-lived alternate name used by The Who at the outset of their career. The name change occurred at the behest of music publicist Peter Meaden, who wanted to make them known as a mod band. "High numbers" was a reference to T-shirts with number designs, a coveted mod fashion item at the time. The band consisted of the same line-up as The Who: Roger Daltrey (vocals), Pete Townshend (guitar), John Entwistle (bass), and Keith Moon (drums). After their first single failed to chart, they reverted to The Who. Both sides of their only official single release, Zoot Suit / I'm the Face (released on major mod label Fontana in 1964), were works of plagiarism; respectively, "Zoot Suit" and "I'm the Face" were Meaden's reworkings of "Misery" by The Dynamics, and "I Got Love If You Want It" by Slim Harpo. Both were well-known mod songs; by all accounts, angered mods were the primary cause the single's failure. The band quickly broke off their association with Meaden, and would shortly earn the mods' affection, and indeed became one of the most emblematic "mod" bands of all time. In 1974, The Who released the album Quadrophenia, their second rock opera, its lyrical subject matter being a search for identity during the heyday of the mods. Fittingly, lyrical references to "I'm the Face" and "Zoot Suit" appeared in the songs "Cut My Hair" and "Sea and Sand", respectively. "Zoot Suit" later appeared on the soundtrack for the film adaptation of Quadrophenia, whereas the two aforementioned album cuts were used only in abridged forms. The High Numbers' only single was released alongside two other studio cuts ("Leaving Here" and "Here 't Is") as part of The Who's box set Thirty Years of Maximum R&B. A number of High Numbers performances also exist in bootleg audio, or video form; most notably, this includes one, or several, performances during their residency at the Marquee Club in London. Shepherd's Bush, West London, United Kingdom Read more on Last.fm. User-contributed text is available under the Creative Commons By-SA License; additional terms may apply.