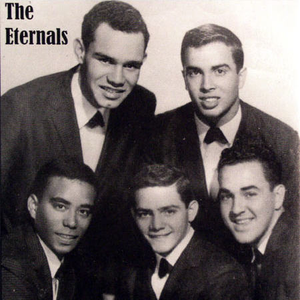 The Eternals may refer to: a reggae group, a jazz group, a doo wop group, an indie band, a French house group or a 60s band from Winnipeg. 1 The Eternals was a soulful reggae group featuring Cornell Campbell, Errol Wilson (Black Uhuru a.o.) and Kenroy Fyffe (The Congos a.o.), known today for 1969's classic "Queen of the Minstrels". Cornel Campbell got his start in the early 1960s at Studio One. He formed his own group called The Eternals (which became Cornell Campbell & The Eternals) who recorded for Studio One or Harry Mudie before splitting in 1971. 2 Based in Chicago, The Eternals formed in the summer of 1997. The band consists of Damon Locks (vocals, keys, effects) and Wayne Montana (bass, keys) both formerly of the band, Trenchmouth, with drummer Tim Mulvenna who has performed with many Chicago avant-jazz musicians including Ken Vandermark. Past drummers include John Herndon (Tortoise) and Dan Fliegel. 3 Five guys from the Freeman Street section of the South Bronx, all of Hispanic (Puerto Rican) decent, met in 1957 while in Junior HS. They formed a singing group and originally called themselves The Gleamers. The members of this quintet included: Ernie Sierra, Carlos Girona, Fred Hodge, Alex Miranda and Anibal Torres. Although they emulated The Flamingos, The Spaniels and The Heartbeats, it was two novelty Latin-flavored tunes that put them on the Rock ‘N Roll map. One day Bill Martin, a noted vocal group manager and dancer, happen to hear them rehearsing. He was very impressed with this young group of teenagers and became their manager. He coached the boys and when their sound was distinct and polished, he brought them to Morty Craft, owner of Melba Records. Girona had written a seasonal tune entitled "Christmas In The Jungle" and it was that song that brought them to Beltone Studios in the late spring of 1959. The lyrics were revised by Girona to accommodate a post holiday season release. The new title was then, "Rockin’ in the Jungle" and was released on The Hollywood Records label. With that came a name change for the Group to The Eternals. It was suggested by their manager based upon a passage in the Bible. Their second recording, "Babalu’s Wedding Day", another spirited novelty rocker, featured Girona’s bouncy Latin lead, Alex Miranda’s incomparable bass and a hot sax solo by King Curtis. It’s flipside, "My Girl", was written and led by Ernie Sierra for his the girlfriend, who he would eventually marry. In 1960, Fred Hodge joined The Army and was replaced by George Villanueva. The Eternals next release on Morty Craft’s Warwick Records label was "Blind Date" and featured George on the B side with "Today". Personnel changes and the passing of Alex Miranda (1967) brought new members (George "Tito" Santiago and Hector Garcia) into The Eternals. There were few and infrequent engagements, but no new releases. Family and occupational responsibilities slowed things down for the group till the early 1970’s. The Eternals reformed with Ernie Sierra steering the group and along with George "Tito" Santiago and Herman Velez (The Hemlocks), providing the nucleus of the present day Eternals. Fred Clavel joined as bass and the return of George Villanueva provide the longest lasting aggregation of The Eternals. The Eternals have remained a 'Class Act' and have been on stage with the best of the ever shrinking great original groups. The Eternals have released The Eternals’ CD "Through The Years" and recorded a Ronnie I Clifton Records release entitled "The Eternals, Today". Through the years, The Eternals have performed at such notable venues as New York’s Radio City Music Hall, Westbury’s Music Fair shows, the Pittsburgh Oldies Record Collectors Club shows, the UGHA shows and many more. They have endeavored to stay true to their original sound and have been successful through the efforts of founder, Ernie Sierra and through the talents and spirit of this unique vocal quintet, The Eternals. 4 Three DJ producers, Dirty Ali, Funky Farid and Monsieur Club, based in the South of France, have come together to form a group called The Eternals. Astropioneers is their first album. Composed like an original retro -futuristic motion picture soundtrack, this album recounts the adventure of three " Astropioneers " on a quest for the interstellar Grail, in a musical universe that was partly inspired by John Carpenter. Some of the songs are dance-floor house and electro-techno hits (Astropioneers, Andromeda Gate, Rebel's Revenge...), whereas the others songs cover the more somber part of the story and are less rhythmical, with more intricate harmonies and keyboard arrangements (Time Bomb, Zero gravity...). Finally, thanks to their collaboration with Benjamin Diamond, they found the alchemy necessary for the closing credits of this imaginary film, with the song " Strange World ". This album may be a new approach to electronic music, increasingly spiritual and uncanny, yet hedonistic, and written to be played from beginning to end without interruption and listened to like a story. 5 Read more on Last.fm. User-contributed text is available under the Creative Commons By-SA License; additional terms may apply.