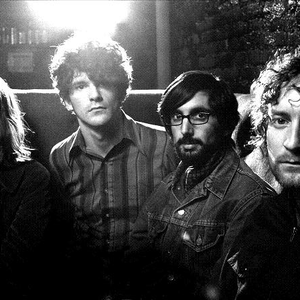 Montreal band The High Dials make psychedelic pop shaded with folk rock, shoegaze and electro influences. Drawing inspiration from a variety of styles the band create wall-of-sound music built on swirling guitars, three-part harmonies and retro keys. The High Dials have had an evolving line-up since their 2003 debut centred around Trevor Anderson (singer-songwriter) and Robbie MacArthur (guitars). Hailed by the likes of NME, Spin and Brooklyn Vegan, they have a deep back catalogue and extensive tour history in both North America and the UK. Highlights from band’s live history include US and UK tours with the Brian Jonestown Massacre, support slots with Echo and the Bunnymen, the Osheaga festival in Montreal and appearances at various international events such as the Great Escape, In the City, CMJ and SXSW. In 2014, they toured the UK and Ireland with The Besnard Lakes. The band recently collaborated with legendary Rolling Stones producer Andrew Loog Oldham on an album of Stones covers - fellow contributors included Johnny Marr, Gryff Rhys (Super Furry Animals) and Elliott Easton (The Cars). Two of the band’s songs currently feature in the hit Netflix series House of Cards. In February 2015 they released “In the A.M. Wilds” worldwide through Fontana North/Universal. Official website: www.thehighdials.net Read more on Last.fm. User-contributed text is available under the Creative Commons By-SA License; additional terms may apply.