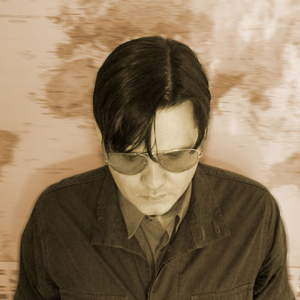 There are two artists using the name: The Modernist: Jorg Burger's(1) electronic solo project as well as Nathaniel Spadafora's(2) solo folk project. (1) Under a multitude of monikers including Burger Industries, Triola, the Bionaut and the Modernist, Jorg Burger has established himself as one of the figureheads of Cologne's influential minimalist techno scene. Although his Modernist alter ego suggests a fascination with the present and the contemporary, Burger has (perhaps surprisingly) cited a love for the classic indie pop of 80s UK illuminati such as Aztec Camera, Orange Juice, Scritti Politti and the Smiths alongside his more expected techno-love. More unexpectedly still, on 2003's Kangmei Burger included a track named after the late T. Rex percussionist, "Mickey Finn". Having seemingly reached the same conclusion as peer and colleague Michael Mayer in his assertion that "Everything has been said as far as minimal techno goes . . ." (as early as 1992, he stated his intent as to make acid house with the spirit of pop), the Modernist's melodic minimalism is steeped with perfectly poised guitar harmonics and meticulously placed vocals. Despite this fondness for "classic pop", Burger describes 1988 the year acid house overtook the dance-floors of Europe, as his year zero. 2 years later he had released his first tracks via Thomas Fehlmann's Teutonic Beats compilation. One year beyond this, he founded the Trance Atlantic and Monochrome labels, releasing tracks by permutations of himself and his friend & partner Wolfgang Voigt aka Mike Ink. Immersed in this electronic music culture, Burger founded the Cologne department of the Delirium record store (which was to subsequently mutate into Kompakt) and the Eat Raw label, ran a magazine, House Attack, and established a graphics and artwork agency called Granit. In ´95 he took part in the relaunch of the Harvest Label on EMI Germany, where he released the highly acclaimed the Bionaut album Lush Life Electronica. The peak of the label was reached in ´97, when Burger started his new project The Modernist with the album Opportunity Knox. 2 years & several releases later, Burger left Harvest to start his own label with Sony music. Burger was to subsequently birth the Popular Organization, the umbrella organization for the Popular Sound, Popular Music and Popular Tools imprints, the latter of which released his The Modernist Explosion 1999. The album was licensed & re-released in an expanded version by Matador Records, US under the modified title Explosion 2000. The ensuing Kangmei from 2003 included a track entitled "Protest Song" and Burger was seemingly making a protest/political assertion in giving his release a title that translated as "resist America". In fact it was a further variation on the everlasting ambiguity of his relation to America as an artist. 2004 saw his return to his former friends & partners from Kompakt, where he released the listening album "riola im Fünftonraum, a state-of-the-art update of his musical concepts as the Bionaut through the 90s. In early 2006 the Kompakt studios were built & Burger´s now working alongside Reinhard & Wolfgang Voigt, Jürgen Paape, Michael Mayer & Superpitcher. So it seems like the family´s back together again & we can all expect some exciting new collaborations & music in the near future. His latest album release is a mix & mash up-cd for Stefan Struever´s new label faith recordings, called: collectors series pt.1 -The Modernist, released in august 2006. Beyond his Modernist alter ego, Burger has recorded as Triola, Geometric Farms, Autobianchi, Science Wonder, Biosphere 1, B. Movement,the Bionaut, Structure (with Jammin' Unit and Dr Walker), Trinkwasser (with Lothar Hempel), Burger/Ink (with Mike Ink), and PopUp (with Antonelli Electr). He has also accepted many remix commissions created under his different monikers. Whichever of this array of names Burger adopts, he is one of the most intriguing creators of Cologne techno. (2) Nathaniel Spadafora initially started his solo folk project "The Modernist" in 2009. His work often focuses on simple acoustic melodies and thin, almost Elliott Smith-like, vocals. Little material has been published but a demo can be expected for mid-2010. Read more on Last.fm. User-contributed text is available under the Creative Commons By-SA License; additional terms may apply.