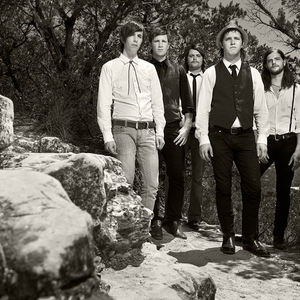 The Rocketboys is an indie rock band from Austin, Texas. On their recordings "20,000 Ghosts" and "Wellwisher," The Rocketboys perfectly married themes of unity and brotherhood with rich, soaring rock, lifting the band to national critical acclaim. The band supported its releases with lengthy tours and multiple festival appearances. Almost inevitably though the rigors of the road took their toll, eventually rupturing the band's momentum in the winter of 2010-11. Three members of the sextet of college friends from Abilene, Texas left to focus on other endeavors, and the split nearly ended the band. The resulting hiatus did have its upside, allowing front-man Brandon Kinder a window both to release a solo EP (under the name "The Wealthy West") and to pen the theme song for The Discovery Channel's new hit show "Bering Sea Gold." However, in the end, the three remaining members (Kinder, keyboardist Justin Wiseman, and bassist Josh Campbell) agreed they weren't at peace letting their collaborative venture cease to exist. The initial hurdles of rebuilding, though difficult and disheartening, began to give way to new-found inspiration. Though the song-writing process drastically changed as a result of the reduced lineup, with less proverbial "cooks in the kitchen,” a more broad, dynamic range of ideas and visions than ever fermented and flourished. The end result and forthcoming album is Build Anyway. Recorded in their home studio and mixed by CJ Eiriksson (U2, Live, Phish), the album chronicles the emotions through the brokenness in abandonment to the search for peace and closure, both personally and musically. "What you spend years building, someone could destroy overnight; Build anyway." - Kent Keith (made famous by Mother Teresa) WEB http://www.facebook.com/therocketboys http://www.twitter.com/therocketboys MEMBERS Brandon Kinder Justin Wiseman Josh Campbell PRESS "When it comes to song writing, the line between 'earnest' and 'overly-earnest' could not be any finer, or risky. In their latest album 20,000 Ghosts, The Rocketboys always stay just on the right side of said line, creating rich anthems that are as infectious as they are sincere." -PASTE MAGAZINE "The Rocketboys have a sound as expansive as the open road and lyrics deep as a Southwest sunrise. Lofty melodies encircle broad indie rock compositions on The Rocketboys' debut album, 20,000 Ghosts." -CHICAGOIST "The band's got some legs to stand on -- Impressive harmonies and melodies, and, overall, quite the pleasing, heartfelt indie rock sound." -DALLAS OBSERVER "[20,00 Ghosts] is fresh with rich textures, like the lead guitar on “Rare Triumphs of Love and Fortune” or the underlying drumbeats of “I Saw a Stone.” With his alto range, approaching falsetto at times, singer Brandon Kinder creates an ethereal, almost spiritual, tone." -TEXAS MUSIC MAGAZINE "...tight, epic, densely layered sound..." - MEMPHIS COMMERCIAL APPEAL "Building gray-hued swells of chorused guitar and minor-key piano processionals, the Rocketboys may have a sound as wide as the West Texas skies, but they’re decidedly overcast with clouds that perpetually threaten rain." -THE ONION, AUSTIN "The Rocketboys' sound is rife with shimmering ambience, reverberating piano, pinging guitars and lead singer Brandon Kinder's smooth yet soaring vocals, bringing a sound resembling other bittersweet and earnest acts such as Keane." -THE OKLAHOMA GAZETTE "The Rocketboys showed a mastery of mood and subtlety. Amplifying a sound made familiar to Texas music fans by bands such as Cue and Explosions in the Sky, the six-member group adorns singer Brandon Kinder's soaring melodies with clear, ringing guitars and full-bodied keyboard arrangements, hard-driving drumlines and well-practiced transitions between calm and controlled chaos." -THE AUSTIN AMERICAN-STATESMAN Read more on Last.fm. User-contributed text is available under the Creative Commons By-SA License; additional terms may apply.