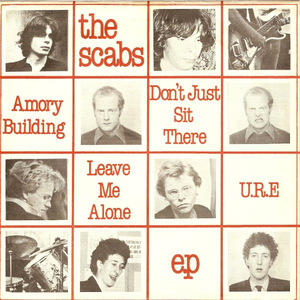 There are 4 bands called The Scabs: a Belgian band, an American funk rock band, an American hardcore band, and an American punk band. 1. - the SCABS are a Belgian band that made one of the most popular Belgian songs ever: "Hard Times". Lead singer: Guy Swinnen, Drums: Frank Saenen, Bass: Fons Symons, Guitars Willy Willy. The band, formed in 1981, had their greatest successes in Belgium in the late eighties and early nineties. They released their first two singles in 1981. After splitting up in 1996, the band came together again in september 2007 for three sold out concerts in the Brussels Ancienne Belgique hall. In the summer of 2008, they also made a return to the Belgian festivals TW Classic and Lokerse Feesten. Their song So Called Friends was featured on the Bloodstains Across Belgium compilation. Official website www.thescabs.be 2. - The Scabs are a Hard-hitting Funk rock band from Austin, TX; led by Bob Schneider. They were formed as the Ugly Americans in 1993, until they changed their name to the Scabs in 1998. website: http://pages.sbcglobal.net/ambrai/scabs/scabs.html 3. - The SCABS - Social Critics Against Bullshit Systems Tired of corrupt politicians, unconstitutional taxation, behind the scene corporate payoffs and society’s overall apathetic view of the American system of living, the Social Critics Against Bullshit Systems (The Scabs) reared their ugly heads for the first time in 1991.Playing local parties and garages until the mid-90's the band was almost disbanded due to member changes and personal conflicts, but in 1999 the band reemerged stronger then ever with a solid dedicated crew to push the band forward. Playing with such legends as The Dead Kennedys, Dee Dee Ramone, Marky Ramone, DRI, The Crowd, The Dickies, D.I., Angry Samoans, Narcoleptic Youth, RKL, Chaos UK and many more., help set the pace for the Social Critics Against Bullshit Systems, who are always ready to point the finger (usually the middle one) at controversial social figures and situations with their Drunk Rock point of view. The hard-core grinds and rhythms provided by creator and rhythm guitarist Andy Nelson and front man Johnny Armstrong, lead guitarist Brain Wash, bassist Greg and drummer Scott Rea, tear through your ears like the Southern California old school used to. Drunk Rock through and through. The bands Goal, to continue to break down the facade built by the system and help pass on the tradition to the next generation. Official Website: www.thescabs.com 4. - The Scabs were a Punk Rock band from Minnesota, formed in 2002. Early 2004 the Austin, TX band legally forced them to change the name....and the Jane Rutmans were born Official Website: www.thescabs.net Read more on Last.fm. User-contributed text is available under the Creative Commons By-SA License; additional terms may apply.