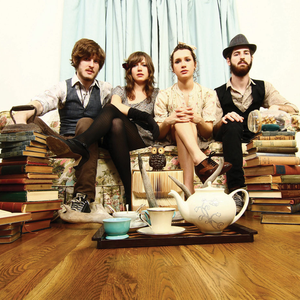 It’s two sisters, two brothers, four friends, eleven instruments, one fun little folk band. However you do the math, The Vespers are a force to be reckoned with. In the spring of 2010, the newly formed group released their debut album, Tell Your Mama, which has been received greatly by critics and fans alike. The indie release even managed to sneak on to a few top 20 lists before the year’s end. The critics have hailed the band as “magnificently unforgettable” and “fresh and infectious”. “I was just about knocked off my stool”, exclaimed Angie Santiago of No Depression. This perfect union of sound has been in the making for years though, just never before as the fearsome foursome as it stands today. Callie and Phoebe Cryar have been honing their craft for many years having been brought up in a musical family and having the luxury of being born and raised in a city ripe with undiluted talent. Their vocal exchange and pure harmonies have been described as “two angels”, “ghostly and haunting”, “honey sweet” and “serene”. Excepting no side note to their vocal prowess is their expansive instrumental skills. The sisters travel with guitar, ukulele, banjo, electric bass, accordion, and mandolin in tow knowing full well how to wield each one effectively. As a duo, Phoebe and Callie recognized that all was not complete in the band they had dubbed The Vespers. A bottom end was to be desired. So as the story goes, at a campfire jam one night, the girls met musical eyes with two long-locked boys who were doing their own thing around Music City. Taylor and Bruno Jones knew instantly that campfire jam was a fateful event. After a single show combining Taylor’s percussion and Bruno’s acoustic bass to the sisters sound, the band was set. The boys’ “tight and creative rhythm section” is grounded in the earthy volume of the gritty southern rock and lowdown blues that they were gratefully exposed to at a young age. That raw approach to the music and to the live stage show was the missing ingredient to The Vespers’ overall approach that is said to be “reminiscent of hearing the words ‘I love you’ for the first time.” In 2011, The Vespers will pack up their unique take on music in their beloved old green van and travel across the country. Four Nashville natives setting out to share what they love. As all will concur that have had the privilege to hear them perform, this is the band to watch and, most certainly, to listen for. Read more on Last.fm. User-contributed text is available under the Creative Commons By-SA License; additional terms may apply.