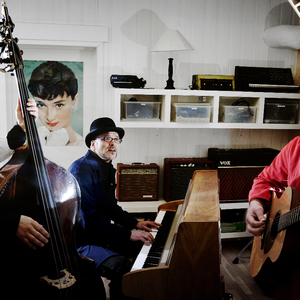 Tre Små Kinesere was a pop group based in Trondheim, Norway which, since their beginning in the 1990s, defined their own acoustic style. They recorded nine albums between then and 2004. The band was composed of Ulf Risnes (vocals and guitar), Øystein Hegge (vocals and keyboard), and Baard Slagsvold (vocals and bass). History Tre Små Kinesere was established in 1988 when the band recorded a track for the compilation album Den akustiske gitarliga. After a number of concerts and favorable audience reaction in 1988 and 1989, the band was signed to the CBS/Sony label in June 1989. Their debut album, 365 Fri, was released on January 17, 1990. This album was nominated for the Spellemann Prize in 1991 but did not receive it. In 1991, they released their second album, Luftpalass, which earned them a Spellemann Prize in 1992. The band received its second Spellemann Prize in 1995 for their fourth album, Hjertemedisin. They broke up in 2005 - Risnes and Hegge found it hard to continue after bassist Baard Slagsvold left the group in 2004. Anyway, Tre Små Kinesere made a comeback in 2010 with the release of new singel Goe daga and once again playing live shows. Truls Waagø has replaced Slagsvold on bass. New album is set to late summer 2010. Selected discography: 365 Fri, album (1990) Luftpalass, album (1991) Vær Sær, album (1992) Hjertemedisin, album (1994) Tro håp & kjærlighet, album (1996) Ultralyd, album (1998) Storeslem, album (1998) De aller beste fra Tre Små Kinesere, album (2002) Gammel sykkel, album (2003) Read more on Last.fm. User-contributed text is available under the Creative Commons By-SA License; additional terms may apply.