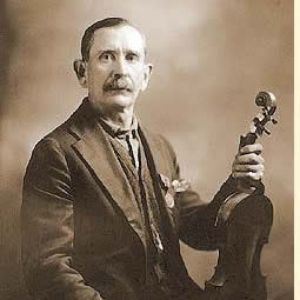 John L. "Bunt" Stephens (Bedford, Tennessee, February 2, 1879 - Lynchburg, July 25, 1951), known as Uncle Bunt, was an American old-time fiddle player. After rising from relative obscurity in 1926 to win a nationwide fiddle contest hosted by automobile magnate Henry Ford, Stephens went on to record several tracks for Columbia Records and made several guest appearances on what would later become the Grand Ole Opry in Nashville before retiring to his farm near Lynchburg, Tennessee. His style of fiddle playing is believed to resemble a style that was popular before the American Civil War. Stephens was born in Bedford County, Tennessee on February 2, 1879 (although some sources suggest he was older). He was orphaned at a young age and raised by his aunt in Flatcreek, a small community located about halfway between Lynchburg and Shelbyville. When he was 11, he bought a fiddle from a tramp, and taught himself how to play. He began performing at local square dances in 1896, and played regularly at various events throughout the early 1900s. Over the years, Stephens' repertoire grew to include folk tunes such as "Sail Away Lady", "The Arkansas Traveler", and "Mississippi Sawyer." Others included "Candy Girl", "Left in the Dark Blues", and "Louisburg Blues", all of which he later recorded. His favorite tune was probably "Old Hen Cackled," which is believed to have won him the blue ribbon at the Ford fiddlers' contest in 1926. In the mid-1920s, Henry Ford held a series of fiddle contests in an attempt to promote and revive Old-time music. The contests consisted of local, state, and regional competitions, with the top three performers at each event moving on to compete at the next level. The winners of the regional competitions were invited to Ford's home in Detroit to decide the national champion. The national fame gained by 1925 contest winner Mellie Dunham generated considerable excitement among fiddle players and fiddlers flooded Ford dealerships across the region in hopes of competing in the 1926 contest. After capturing first prize at the Ford dealership in Lynchburg, Stephens proceeded to the Tennessee state-wide contest in Nashville, which began on the morning of January 19, 1926. Stephens survived the first round of the state contest, and with five other finalists, was selected to play at a sold-out Ryman Auditorium that night to decide which three fiddlers the state would send to the Southeast regional contest. Stephens won third place behind Uncle Jimmy Thompson and a one-armed fiddler from Hartsville named Marshall Claiborne. The southeast regional finals of the Ford contest took place at Brown Theatre in Louisville, Kentucky on January 20, 1926. The three finalists from Tennessee competed against three finalists from Kentucky and two from southern Indiana. Stephens won second place behind Indiana fiddler W.H. Elmore, and, being in the top three, earned the right compete in the national finals in Detroit. At the national finals, Ford was most impressed by Stephens— perhaps because Stephens played an older style of music that Ford may have considered more authentic— and awarded Stephens the first prize and the title "World Champion Fiddler." Stephens was given $1000 in prize money, a new car, and a new suit. After his victory in Detroit, Ford sent Stephens on a brief tour. Stephens played at various venues across the Eastern United States, which included a radio guest spot in Chicago and several guest appearances on the Grand Ole Opry (then called the WSM Barn Dance) in Nashville. In March 1926, Stephens traveled to New York to record several sides for Columbia Records. They remain his only known recordings. Stephens died at his home near Lynchburg on July 25, 1951. He is buried at the Hurricane Church Cemetery just outside of Lynchburg. After his death, his recording of "Sail Away Lady" was analyzed by ethnomusicologist Harry Smith, who believed it to be played in a style that pre-dated the American Civil War. Sail Away Lady appears on Anthology of American Folk Music (disc 2a) Read more on Last.fm. User-contributed text is available under the Creative Commons By-SA License; additional terms may apply.