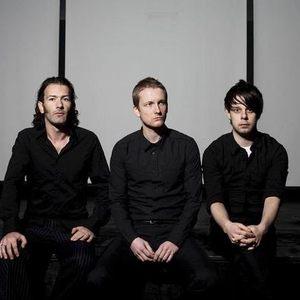 Glasgow, United Kingdom (2004 - 2010) Union Of Knives are a balance of youth and experience, brutality and compassion, dirt and clinical cleanliness. On stage Craig Grant and Chris Gordon play dual frontman roles, supported, like a see-saw on its axis, by Dave McClean. In the studio each member is autonomous--lyrics, beats, melodies, and ideas come from everywhere. The music they make is steely hard, yet cut through with raw, emotive longing and power. Their guitars are loud, but they have no room or need for a drummer. 'Evil Has Never' is an oily black lament to a love that just can't work. 'Opposite Direction' channels the power of prime My Bloody Valentine; 'Taste Of Harmony' steers melody through starkly sculpted electro. Chris and Dave are from Glasgow; Craig is from Aberdeen, though now he's an 'adopted Glaswegian.' The house Craig grew up in was situated right by the sea, which might sound romantic, but things are a bit more complicated than that. 'I miss living by the sea, I miss being on the beach,' he says. 'But I also forget how mad the whole place is.' He lived on a brand new scheme of just three or four houses. From the front window you could see an old, abandoned hotel that barely clung to the cliff edge. Look to the left and you would see a huge old red and white lighthouse that cast its glow into his room every single night, keeping him awake for years. When Craig moved to Glasgow he had insomnia for two years. Look out the back window and you would see a huge RAF base and the biggest power station in Scotland--a place with a quarter-of-a-mile-high chimney pumping out black smoke 24 hours a day. Walking to school, Craig would have to choose either the power station route or the sea route. Usually he simply chose not to go to school at all. Chris and Dave met in Glasgow's Nice and Sleazy. Dave was a soundman there; Chris worked behind the bar when he wasn't singing on Dave's tracks or producing demos for local bands. The pair eventually set up their own studio where they recorded bands and did remixes for Craig Armstrong, Snow Patrol, and others. Then, one night back in N&S, they met Craig. Craig had moved to Glasgow and was writing songs in his bedroom. He had been singing at a local acoustic night and was recording with his band, Close To The Ground, but things weren't happening very fast. When Chris came to produce some demos for the band, things changed. Quickly. Chris and Dave's band, now called Union of Knives, were static. 'The tracks were great but we were unsure what to do with them,' says Chris. 'There were songs that didn't have lyrics or melodies, but Craig would come and improvise this amazing stuff over them.' Gigs started happening, new recordings were planned. Craig would join them at shows providing vocals and guitar. After a few months, in the summer of 2004, it became clear he should be a full-time member. Chris says he never thinks it odd that he and Craig are both frontmen: 'It seems natural to us,' he insists. 'This band is not driven by one personality, we both sing, we both do backing vocals, we need two strong voices. I think it looks great, but then, I can't see it.' 'People tell me it looks really weird for the first three songs then you get used to it,' nods Craig. 'We look odd, but that's a good thing.' Dave is a mystery man even within the band--a proper mad professor character. 'I think he has a dark secret,' says Chris. 'He always makes you think he's got bigger fish to fry.' 'He'll be playing keyboards in the studio,' says Craig, 'pick up the phone with one hand, speak while still playing, then, when the song ends, he'll power away on his bike.' 'Dave has golden ears,' says Chris. 'I'd been in the band for six months before I even met him,' says Craig. Craig says Union Of Knives is about the conflict and harmony of opposites. 'There are two sides to everything. At all times. Instinct and intellect sums it up succinctly,' he says. 'That visceral battle is in every song, it's still a delicate balance.' 'The most important thing there is is balance,' adds Chris. The lyrics are between subtle and obvious; in 'I Decline' I sing, 'there's nothing left' which is a direct reference to the way we are all fucking up the environment.' Chris isn't so sure. 'You look at the world and say, well, actually everything's OK - this is the pre-ordained path. The earth is doing what it has to do to survive. There's always that duality, two sides.' Union of Knives--the sound, the attitude--is balance incarnate. from www.unionofknives.com Read more on Last.fm. User-contributed text is available under the Creative Commons By-SA License; additional terms may apply.