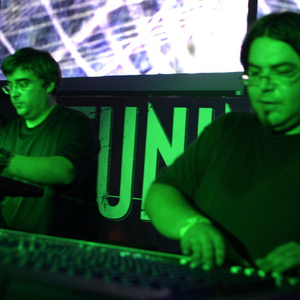 Wizzy Noise is a project of Micky and Uriel that hail from Greece. Both beeing ardent and meticulous collectors and listeners of Trance music since 1994 they immediately have fallen in love with the first waves of Goa Trance washing away by the Greek shores by the summer of 1995. A magic time for parties back then since all it was new and fresh and all music had the glittering colour of euphoric outdoor parties and revellry in the woods. After the first 2 magic years of partying, a thought and a plan of action started to formulate in our minds as our primitive cerebrum tried to so desperately to awaken with the sheer power of music that onslaught our brains in the years of 1995-98.. The duo having met in a party in Athens in the past also aided by the fact that Micky stationed in Thessaloniki during his military service (Oh yes it is also compulsory in Greece)decided to make some noise together by making a track and experimenting a bit with two synths a mixer and a couple of monitors and a DAT machine. Little they knew of the forthcoming success that was about to hit their door in short time's notice. After one year of mediocrity and a fact that they did not receive any kind of help by no one little by little the group became a recognised and distinguised band in the psychedelic trance scene worldwide. Always with a strictly psychedelic and full electronic sound the duo deviated a lot as years went by a fact that caused much controversy and flame in all arrays of electronic music fans. All wizzy noise albums follow the endless cycle of evolution and rebirth of ideas, from the techno winterlands of german psy sound to the beaches of south eastern europe the variety and depth of wizzy noise is a spectacle to behold as our sixth consecutive album show.. In all these years of travelling around the globe the group made many friends and met a lot of people in the psychedelic scene worldwide. Needless to say the experiences, energy and people that we meet in parties push us to continue what we do. The band has played all around the world alot in all kinds of parties and festival's worldwide like Arvika festival in Sweden ,XXXperience special edition in Brasil, FUJI ROCK festival in Japan, VOOV experience in Germany,Sonica Festival in Italy and SOS Festival in Japan for two consecutive years,Time and Space Festival in Mexico and in places like Los Angeles, San Fransisco,Eugene Oregon , Cape Town, Johanesburg, Melbourne,Sydney,Sao Paulo,Rio De Janeiro, Vitoria Florianopolis in Brasil, Belgrade, Montreal and Toronto in Canada (Canadian West Coast soon to be), Paris and Orleans in France, London,Israel(Oww Yeah!!!), Portugal, Moscow Russia. Read more on Last.fm. User-contributed text is available under the Creative Commons By-SA License; additional terms may apply.