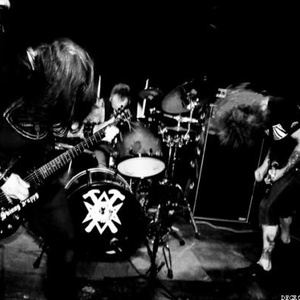 WOLVHAMMER is a metal band based in Minneapolis, Minnesota. Self-described "blackened sludge punk," they recently released the Dawn of the 4th EP, a follow-up to their first EP, Rich with Bloodfuel. Their drummer offered the following statement about the band; "We wanted to take the things we loved about old school black metal/post-punk/hardcore/doom/rock and infuse that into something truly honest. No bullshit Satanism or sensationalism, just pure honest hatred for religion, capitalism, politics, sheep mentality and typical human behaviour. We wanted to write simple, memorable, and truly hate-filled metal anthems for ourselves and all the other blue collar, working poor, and generally unsatisfied people who are looking for something raw and classic as soundtrack to rise up and fight the status quo around them in any way they see fit to do" - their drummer H.R. Their first full-length, Black Marketeers Of World War III has been released in 2010 by Init Records. http://wolvhammer.blogspot.com http://www.myspace.com/wolvhammer Read more on Last.fm. User-contributed text is available under the Creative Commons By-SA License; additional terms may apply.