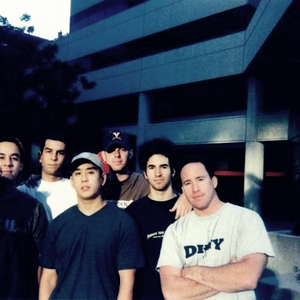 Xero is the name of more than one artist; 1: an Australian post-punk band of the early '80s, 2: a alternative hip-hop/rap-rock band from the late '90s [Now known as Linkin Park] and 3: a NWOBHM band. 1: Xero (also known as Zero, Ziro and Xiro) was a Punk Rock and New Wave band from Brisbane in Australia from the late 70s to the early 1980s. They were the most popular independent act in Brisbane during the time. The band is named after the character Xero from the book The Atrocity Exhibition by J. G. Ballard. {The band was originally named after Zero Collective's Zero Magazine - (An anarchist/anarcha feminist monthly) after it arrived with some fanfare at the Red and Black bookshop in Elizabeth arcade in, I think, late 1977. I can see her face but I can't remember the name of the woman who suggested it - some of the earlier members would.} The music on their only vinyl release Lust In The Dust is firmly in the new wave style, with Irena Luckus's Jupiter 8 synth playing in the foreground of arrangements. Luckus also sings on a number of tracks, and her vocal style is reminiscent of that of Siouxsie of Siouxsie and the Banshees The initial lineup was Irena Luckus, Deborah Thomas, Vic Allen and Lindy Morrison, soon joined by John Wilsteed. Lindy Morrison was later replaced on drums by Steven Pritchard. Apart from some independent cassette releases, in 1982 the band released a mini-album called Lust In The Dust with six tracks on it on the independent label X-Squared. They were the first band in Brisbane, Australia to release an album independently. After this, the band briefly moved to Sydney before vanishing into the aether after Luckus moved to Europe. 2: Xero was the first name for Linkin Park, formed in 1996 by Mike Shinoda. It included Mark Wakefield (vocals), Mike Shinoda (rapping), Rob Bourdon (drums), Joseph Hahn (DJ), Brad Delson (guitar) and Dave "Phoenix" Farrell (bass). The original name they chose was SuperXero but it was revised to Xero. They made just one demo tape, which included the songs "Fuse", "Reading My Eyes", "Stick N Move" and "Rhinestone". The project floundered and they never achieved much success. After Mark Wakefield left to become the manager for Taproot the band hired new vocalist Chester Bennington, formerly of the band Grey Daze, and made the Hybrid Theory EP under the band name Hybrid Theory. The band again changed names from Hybrid Theory to Linkin Park at the release of their debut album, which is titled Hybrid Theory. In the Hybrid Theory album the song "Forgotten" is an evolution of "Rhinestone". Also from the Hybrid Theory album, the song "Runaway" is an evolution of "Stick N Move". During the 2006 Summer Sonic festival, Linkin Park played "Reading My Eyes" with Chester. This is notable because it is possibly the first time the band has played any Xero Demo song with Chester, and it is also the first time in ten years that the band played a Xero song at all. This track is available on Linkin Park Underground 6.0. 3. Xero was a british band from the N.W.O.B.H.M. scene. Tommy Vance, host of The Friday Rock Show on BBC, became a fan of the band and they did two live sessions for the show. One of the songs they did, Cuttin' Loose, were included on The Friday Rock Show album in 1981. This song is featured in a slightly different version on the Metal For Muthas 2 compilation. In 1983 their single Oh Baby entered the charts in the UK. Bruce Dickinson did the vocals on the song Lone Wolf, which was included on the 12" and a limited three track 7" version of the release. Despite the success of Oh Baby, the band failed to put out any more new material, and soon faded into oblivion... Read more on Last.fm. User-contributed text is available under the Creative Commons By-SA License; additional terms may apply.