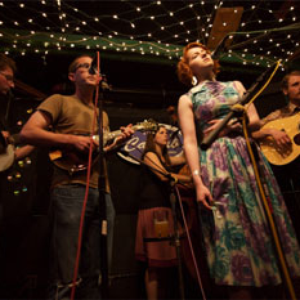 With its bold new brand of acoustic music, Joy Kills Sorrow pushes right through the envelope and out the other side. The Boston-based stringband brings a decidedly modern sensibility to an old-world sound, channeling the prodigious talents of its individual members into elegant arrangements and well-crafted songs. While the group pays due homage to its Bluegrass roots—its name is taken from WJKS, a radio station that broadcasted the Monroe brothers’ show in the 1930s—the band truly excels in its rich and textured treatment of more contemporary material. Boasting a full arsenal of original songs, Joy Kills Sorrow plumbs the entire spectrum of its spare instrumentation, effortlessly merging influences as diverse as folk, rock, pop, and jazz. The music that emerges is dark and often funny, ruminating on modern life and love with eloquence and wit. The result is a radical new strain of folk music, one that bravely breaks with tradition even as it salutes the past. Formed under the banner “a modern American string band,” Joy Kills Sorrow first emerged out of Boston’s thriving folk music scene in 2005, releasing their self-titled debut album in 2007. Two years and several band members later, Joy Kills Sorrow is poised to make its mark with a new lineup of some of the area’s finest young talent. Founding member Matthew Arcara, a subtle and expressive guitarist, was the 2006 winner of Winfield’s National Flatpicking Championship and has performed with such luminaries as Darol Anger. Joy Kills Sorrow’s newest addition, mandolin virtuoso Jacob Jolliff, is Berklee’s first full-scholarship mandolin student and a veteran performer, having toured professionally since age eleven and shared the stage with mandolin legends David Grisman and Mike Marshall. Wesley Corbett, a banjoist of uncommon facility and grace, was featured in the August 2008 issue of Banjo Newsletter and has toured nationally with Crooked Still and The Biscuit Burners. Emma Beaton, the 2008 Canadian Folk Music Awards’ Young Performer of the Year, adds an earthy, powerful presence to the band as its newly-minted vocalist. And bassist Bridget Kearney, winner of the 2006 John Lennon Songwriting Contest, is largely responsible for Joy Kills Sorrow’s inimitable sound, thanks to her impeccable musicality and distinctive songwriting style. Since its inception, Joy Kills Sorrow has performed at theaters, listening rooms, and festivals across the continent and has been featured on nationally syndicated radio programs. In 2007, the group won first prize in the Podunk Bluegrass Festival Band Contest; that same year, they were deemed the “‘poster children’ for the burgeoning Americana format” by Sing Out! magazine. The band has evolved considerably in the years since then, and their sophomore effort promises to deliver. Slated for release February 23 on Signature Sounds, the new album, entitled Darkness Sure Becomes This City, was produced by Eric Merrill and features a wealth of original material from members of Joy Kills Sorrow as well as some fine new songs from other composers. Darkness Sure Becomes This City is an accomplished piece of work, laced throughout with polished arrangements and pop-inflected melodies. With it, Joy Kills Sorrow gracefully combines the old and the new, and the outcome, however surprising, is sublime. Read more on Last.fm. User-contributed text is available under the Creative Commons By-SA License; additional terms may apply.