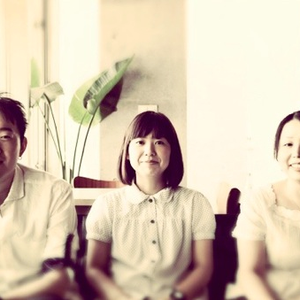 Miaou were formed in 1999 by Tatsuki Hamasaki and sisters Mayumi and Hiromi Hasegawa. Their debut album, 'Happiness' (Noon records, 2003), was quickly followed by a tour with Australia's Art Of Fighting and then their 2005 release, 'Make These Things Alright', the band's second full length album. That same year saw a tour with Canada's Below The Sea, with whom the band also collaborated with to record a split e.p., released on Preco Records, the label of Tokyo music store LINUS RECORDS. In 2006, things started off with the inclusion of 'Grasslands' on the Where Are My Records compilation c.d., "Je T'aime", before the band headed into the studio to record probably their most distinctive, beautiful and accomplished material to date with the painted e.p. (Thomason Sounds). The e.p. was once again recorded by toe's Takaaki Mino, who has produced all of their material to date. The release of the painted e.p. was followed by a Japan tour with Thomason Sounds label mates Tracer AMC from Northern Ireland, as well as securing a worldwide distribution deal with Darla Records. Their fourth album, was recorded in Tokyo in the Spring of 2011, "The Day Will Come Before Long" sees miaou push on into more electronic territory than before – bigger synths, broken up samples and glitchy guitars. Mixed by electronic extraordinaire Cornel Wilczek (Qua) in Australia and featuring some achingly beautiful vocals from special guest singers in Ben Cooper (Electric President/Radical Face) and Ben Holton (Epic45). Expect to hear swelling synths, crashing guitars and electronic beats making up miaou’s sonic soundscapes. Read more on Last.fm. User-contributed text is available under the Creative Commons By-SA License; additional terms may apply.