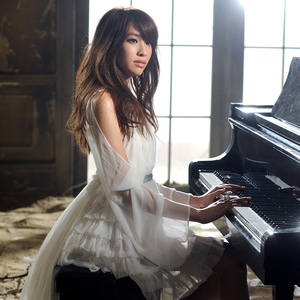 Cindy Yen (Traditional: 袁詠琳, Pinyin: Yuán Yǒng Lín), is an up-and-coming Taiwanese-American singer-songwriter whose musical styles vary from R&B, soul, pop, and classical, to rock, acoustic folk, dance and hip-hop. She was born November 14, 1986 in Houston, Texas, US. She started learning piano from the age of 4, which sparked a dream in her to become a singer. However, her mother did not support her dream and wanted Cindy to have a more 'stable' career instead. She started learning the violin at 10 and then told her mother than she wanted to learn at least 10 different instruments. After her parents divorced when she was 12, Cindy stated that 'Piano became her best friend,' and she once even stated during an interview that "without piano, there is no me. Piano is my other half, what makes me complete. Everything I bury inside my heart I let out when I play.' She attended Bellaire High School near Houston, TX and in 2004, went on to study and graduated from The University of Texas at Austin. When Cindy was 17, she begged her mother to accompany her to meet different record companies in Taiwan. Although she was immediately offered record contracts, her mother still did not allow her to pursue her dreams as a singer. She remained adamant that Cindy should finish college first before starting a career in the music industry. Therefore, Cindy agreed to go to college and temporarily pushed her childhood dream aside to fulfill her mother's wishes. While attending college, Cindy participated in many talent shows and music organizations, and even auditioned for the hit show "American Idol," in which she was rejected twice by Paula, Randy, and Simon. Never discouraged, she began training herself in singing, songwriting, and dancing, in hopes that she can be fully prepared if she was ever again offered a recording contract. In 2008, she won the title of Miss Chinatown Houston 2008 and continued to win the national title of Miss Chinatown USA 2009. After graduating from college with double degrees in Music - Piano Performance and Broadcast Journalism in 2008, Cindy's mother finally agreed to let her do what she had always wanted to do, and in Fall 2008, Cindy moved to Taiwan with her self-made demo in pursuit of her dreams in becoming a recording artist. During the first few days, she met many record companies but was repeatedly rejected by all. They told her that her music was too "Western" and not suitable for the Asian market. They also said her style of singing wasn't suitable for the Chinese language, because it was too R&B and soul. But Cindy wouldn't give up on her dream. Finally, Cindy found a company that was willing to give her music a chance, and became the first artist ever to sign to famous Taiwanese popstar Jay Chou's company, JVR Music, in February 2009. She later stated in an intervew that Yang Jun Rong, the person whe has managed Jay Chou from the beginning, told her that she was the first person he had signed on since he started managing Jay Chou. She also admitted that she did not know who Jay Chou was before signing with JVR music (She had heard of him, but later did a Google search and was very surprised with the results). Within eight months of signing, Cindy released her debut single, "Sand Painting," a duet sung with Jay Chou and composed/produced by Cindy herself. It was notably the first time Jay has ever sung a song not written by himself, demonstrating the immense support and confidence that Jay had in Cindy's music. "Sand Painting" became an instant hit and was the number one downloaded ringtone in Taiwan. It reached the top on many Asian billboards and at KTV. Cindy’s debut album was listed under Top 10 on the G-Music charts and Rose Records for 5 consecutive weeks, and was the number one listened to album on Taiwan’s KKBox Charts for 4 consecutive weeks. "Sand Painting" went on to place as one of China's most popular top ten hit songs of 2010, as ranked in China's 2010 Mandarin Web Original Composition Pop Music Charts. Her debut album earned her the title of "the smiling new female voice of classical & pop music." Her sweet & beautiful appearance earned her compliments such as "Patty Hou’s side view," "Jolin Tsai’s mouth," "Jessie Chiang’s figure" & "Alice Tseng’s temperament." Cindy released her second album, '2 Be Different', on 29th September, 2011. Like the first album, Cindy wrote and produced all ten songs on her album, except this time, Cindy shed her previous "smiling, girl-next-door" image and shocked the world with her new, sexy electronic dance single "陷阱" ("Trap") instead. The sexy music video caused many media and public viewers to compare her with Jolin Tsai, and many netizens even commented that Cindy could be the next "dancing diva of Asia." Her second album successfully gained her the new title "唱跳創作新女生", or "singing, dancing, composing new female artist." Cindy emphasized in her interview with Singapore's Razor TV that her new album aims to empower women and give them inner strength, whether through her electronic dance music or soulful R&B ballads. With her album slogan, "Don't be afraid to be different," Cindy's new image focuses on natural, inner beauty, and emphasizes the strength of "being yourself." Read more on Last.fm. User-contributed text is available under the Creative Commons By-SA License; additional terms may apply.