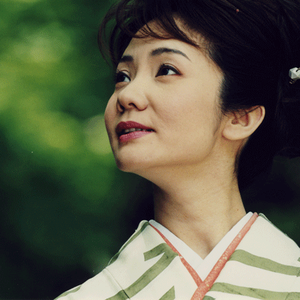 Kaori Kōzai (香西かおり, birth name: 香西香 Kōzai Kaori) is a female Japanese enka singer born 28th August 1963 in Osaka Prefecture. She is a graduate of the Osaka City Eastern Senior High School for Trade and Business, where she studied bookkeeping, abacus calculation, and data processing. She also holds a diploma in tea ceremony from the Urasenke school of tea ceremony. She is also educated in flower arrangement and nichibu, a traditional form of Japanese dancing. In 1975 she won the first prize at the Sankei minyō song contest for youngsters. In 1976 she was the runner-up for the same prize. In 1981 she won a prize at the 4th NTV minyō song contest. Later the same year she made her début as a recording artist under the CBS Sony label. She is currently signed to Nayutawave Records. For more up-to-date information (in Japanese) on Kaori Kōzai, please visit her official website. Read more on Last.fm. User-contributed text is available under the Creative Commons By-SA License; additional terms may apply.